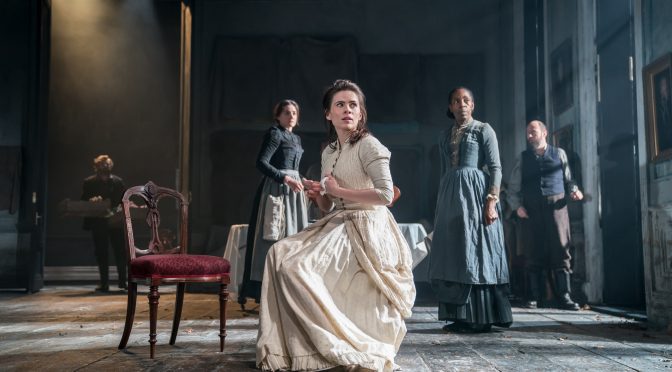 Theatre folk love to make revivals of plays relevant to current times. Now and then, the connections made seem forced, but this new adaptation by Duncan Macmillan of Ibsen’s play from 1886 resonates with the present in a way that frequently astounds. Set around an election, with a country polarised and inequality increasing, nationalism and fake news are everywhere. Meanwhile, the play’s central figure of Rosmer recognises that his privilege comes with a “moral debt” – as they say on Twitter, he is ‘woke’. A conscience examined in the finest detail and a brilliant performance by Tom Burke contribute to a superb production that fizzes with topicality.

Rosmersholm is no dry political disquisition. Giles Terera’s stage presence – as the establishment figure of Andreas Kroll – makes sure that the debate is entertaining. Rosmer’s brother-in-law and old friend, Kroll views radicalism as a threat to not just the country but the soul. And there’s more – ghosts for a start – which director Ian Rickson allows to be symbolic as well as pretty creepy. The characters and the damaged house of Rosmer, with its gorgeous set from Rae Smith, are haunted in many ways, with gradual revelations about the family’s history that make this quite the thriller. It’s all balanced expertly by Rickson and, if the evening is overpowering at times, it’s always exciting.

Above all, Rosmersholm is a romance – a particularly intense and tragic one. Marking out Rosmer as a “fallen man” involved with an “independent woman” could remind us too forcefully that this is a period piece. But not a jot. While Burke brings out the complexities of his role as a former pastor who has lost his faith and whose family name becomes a political football, his love interest, Rebecca West, is made the star of the show. This is a tremendous vehicle for Hayley Atwell, who gives a performance full of fantastic detail. West even seems as if she might provide a happy ending. You don’t need to have seen too much Ibsen to be suspicious of that, but Atwell and Rickson make subsequent revelations edge-of-the-seat stuff.

This is a relationship based on talking politics (that’s how our couple fell in love). The chemistry is fantastic, but the ideals discussed are also exciting and challenging. West proves an extreme figure who allows no compromise and there’s an immaturity in both her and Rosmer – take your pick blaming stunted upbringings or a narrow society – that leads to catastrophe. Rosmersholm becomes a frightening place – the talk is of sickness and sacrifice, death or change. No middle ground is allowed. It’s surely just the position, with all its dangers, that we face right now.