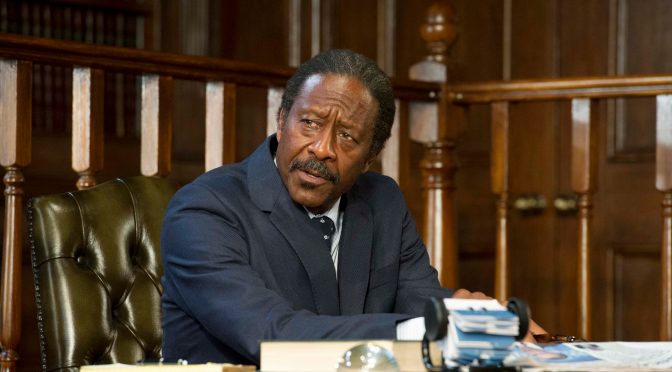 In Race, which opened last night at the Hampstead Theatre, playwright David Mamet uses the legal system as a prism through which to examine racism in America. Race centres on the case of a white man accused of raping a black woman. It’s a hard-hitting, foul-mouthed, hilarious affair with the most serious of themes.

This is a huge coup for Hampstead; artistic director Edward Hall is justifiably pleased to give the show its UK premiere. Any work by Mamet is an important event for contemporary theatre writing, and in the must-see category by virtue of his name alone.

And it’s also characteristic Mamet: brilliantly contentious, perversely confrontational, and deliberately provocative. The play is about the lies we tell each other and ourselves about race, set in a legal world whose dialectic consists solely of falsehoods.

The law often makes great theatre; here the legal team of Lawton and Brown, played expertly by Jasper Britton and Clarke Peters, are more than open to a connection with “pageantry”. Overblown certainly, you might pray they are a parody, but their bluntness – constantly mercenary and misanthropic – is a technique to tackle taboos and get howls of laughter.

The key to the play is a new addition to the law firm, Susan, an honours student whose agenda gives rise to the most testing moral questions. Nina Toussaint-White is superb in the role, revealing that in razor-sharp competitions with her elder colleagues her character isn’t at the same professional level. And Toussaint-White conveys a deep pain behind her character’s sleek façade, injecting much-needed humanity into the play.

Mamet’s cynicism is such it occasionally beggars belief. Plot points designed to make us question Susan’s character are clumsy. There’s also the issue for London audiences that, understandably, the focus is very specifically on American society. But these are caveats. Race is never less than thrilling and this production makes a trip to Hampstead essential.