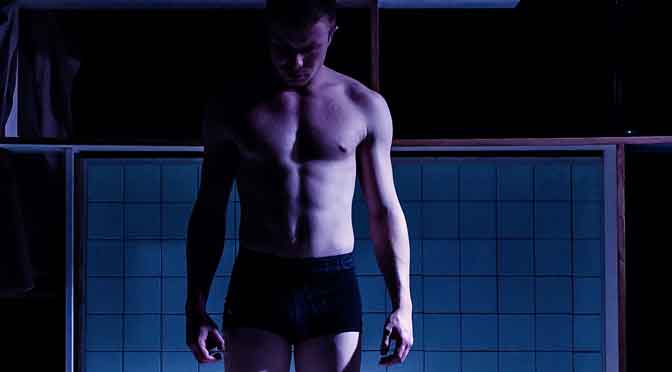 Unlike its title, Brad Birch’s new play, Even stillness breathes softly against a brick wall, which opened at the Soho Theatre last night, is a short, terse work. In a spirit of brevity, suffice to say – this is strong writing with much to offer.

A couple, “Him” (Joe Dempsie) and “Her”, (Lara Rossi) live recognisably modern lives – all about technology (Simon Slater’s accompanying soundscape is effectively annoying) and takeaways. There’s nothing new here and, although Birch writes about it well, it goes on a little too long.

The scenario develops with the couple rejecting consumerism and in so doing effectively turning away from the whole contemporary world. It’s a radical fantasy: just saying no. A dream, or nightmare, sure to divide an audience and a bold place for a dramatist to position himself.

It will either disappoint or reassure to find that this breakaway ends up being depicted as a breakdown: the squeezed middle turned screaming and mad. The pressure the successful young couple are under doesn’t move us enough, and reports of war on the news that obsess ‘Him’ are an opaque parallel.

But the play reads very well indeed. Birch started his work by writing a poem, and it shows; the text is layered and the language ripe. Taken off the page with great respect by director Nadia Latif, it’s staged skilfully in a carefully constructed set by Lorna Ritchie that the couple make a right mess off – I pity their landlord.

This is one of those works that makes an effective showcase for acting talent: demanding, intense and requiring intelligent performers. Making an impressive stage debut, Joe Dempsie seems very much at home, a great presence, appealing and charismatic with a natural ability to bring out comic touches.

It’s when presenting a couple in love that Even stillness breathes softly against a brick wall is at its most appealing. Birch, aided by the fine performances, writes an engrossing internal dialogue for each character, combined with their conversations and occasional comments to the audience. It’s an exacting evening, but one with plenty of rewards.