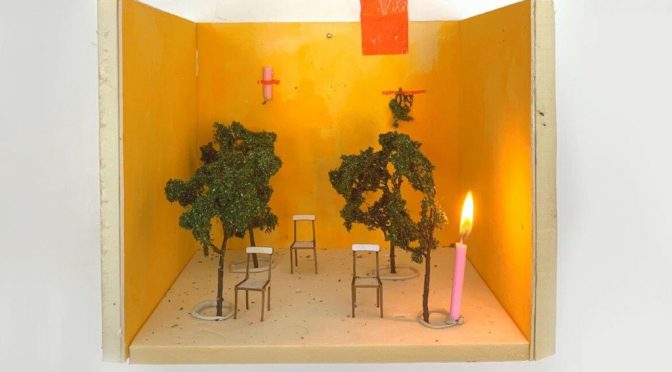 Hands up, I like theatre sets that are expensive, literally flashy and preferably moving. But this online project from award-winning designer Rosie Elnile is impressive for the opposite reasons. From her work with Ellen McDougall in Notting Hill, Elnile has taken the lockdown as an opportunity. And that’s the first recommendation to check out her project.

Creating a digital space to explore and enjoy, Elnile takes us into her thinking about set design with a collection of writings, poems and pictures that have inspired her, along with commentary to listen to, provoke and educate. The thinking is deep, questioning the fundamentals and ramifications of her discipline.

It is striking, and topical, how concerned with the broadest of cultural trends and theories Elnile is. Also, how politically correct. The later isn’t intended to be derogatory… why wouldn’t you want to be right about politics? The environment and all manner of power structures are considered as Elnile makes structures of her own. The concerns are eye-opening, if anxiety producing. The happier point is that Elnile’s practice is energised by the problems. There is woe… but get up and go, too.

The project is original: Elnile is quick to describe Prayer as unfinished and clear that the work shows “impossible models”. And we’re used to perfection in the theatre! But both factors engender idealism and new thinking, centring on the process of making rather than an outcome. Prayer becomes a personal piece: Elnile’s artworks are presented and there’s a strong sense of commitments and passions.

Among all the caveats and concerns – which taught me a deal – there’s one point I’d take issue with. Describing prayer as a “kind of surrender” is interesting. But is Elnile doing justice to her achievements? As well as prayers of submission, there are also prayers of resolution. It is clear Elnile can problematise, with a steely eye on history and politics. But there is also resolve… for the future. The idea that design should facilitate care and compassion proves, well, exciting. The tone of the piece is meditative, but it is also motivating.