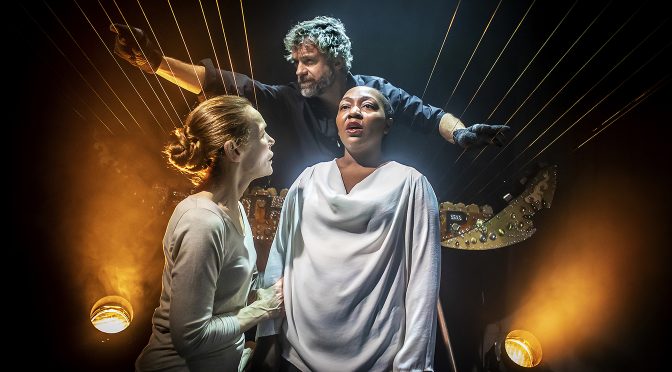 Closed for the last five years due to a major redevelopment, it’s a warm welcome back to Hammersmith’s fantastic arts centre. The newly spacious foyer is needed for everything that’s going on – films, music and cabaret as well as theatre. The refurbishment is tasteful but not flashy, as is the food on offer. And the drinks coasters are sweet. First up for play-goers is Paul Schoolman’s credible adaptation of Ingmar Bergman’s film, which has the earth harp as a surprise factor in its success.

While there are pleasant projections throughout the show (courtesy of P J McEvoy), it’s a smart move when bringing a famous film to the stage to focus on sound rather than sight. With its strings stretching over the audience, the earth harp (played by William Close on the night I visited – and by Catrin Meek by the time you read this) makes an extraordinary noise. How it works, especially when the body of the instrument is used, is beyond me, but it has a special theatricality, and going along just to hear it is highly recommended.

What’s going on next to the harp is worth watching, though. The story is presented by Schoolman as a retelling of Bergman’s script, including some notes, guaranteeing interest for cinephiles. Alice Krige and Nobuhle Mngcwengi give strong performances as a nurse called Alma and her patient, Elizabet, an actress who has willed herself into silent paralysis. Bergman’s psychologising has a dated air and, if you wanted to see it as ultimately reductive (both women’s troubles seem to boil down to maternity), then I might not argue. But that doesn’t detract from Krige’s achievement in creating a character we come to feel so close to. The same goes for Mngcwengi, who conveys her role while speaking so little.

While there aren’t real conversations in Persona, the interactions are far from one-sided. As Alma reveals her darkest secrets, Schoolman’s narrator and Elizabet absorb them like a spooky Greek chorus. Recalling that ‘persona’ is a term for a theatrical mask, all three characters play with the roles they adopt and abandon. It may just be mind games or the human condition stripped back and given a theatrical flourish, but it shows strong work from Schoolman as a director – and Krige does especially well to present the artificiality of what’s going on with a natural touch.

Fascinating as it is, this journey into the “landscape of the mind” isn’t for everyone and has a wilfully opaque air. You can credit Schoolman for preserving the feel of Bergman’s film while managing to make it work theatrically – well done. But that still isn’t a guarantee you’ll enjoy it. By the time we get to the women referred to as “I, me, us, we”, as their identities slide and elide, no matter how good a job the team does, such destabilising of the ‘self’ may start to confuse more than excite.