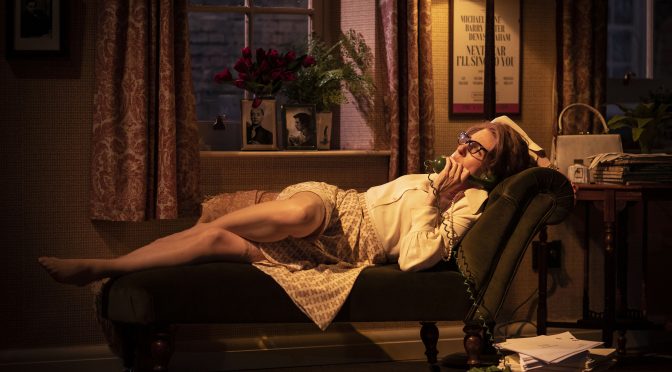 Alan Plater’s 1999 play tackles two subjects. As a day in the life of theatrical legend Margaret Ramsay, it’s about a formidable and fascinating woman. And Peggy For You is also a play about plays. This strong revival, carefully directed by Richard Wilson, gives both topics their due: both are interesting but I’ll admit to preferring one far more than the other.

Both Plater and Peggy have plenty to say about plays. And Art with a capital A. Tricks and techniques of the trade are plentiful, some of them are funny (even for those of us who don’t work in the theatre). But the insights are heavy handed. It’s hard not to make this subject feel rarified. Meta-theatrical moments are clumsy.

Plater shows us three ages of the playwright. There’s the newcomer, the man of the moment and a former most-promising but now out of fashion. Trouble is, it feels all these descriptions should have a capital letter. The characters are well played by Josh Finan, Jos Vantyler and Trevor Fox. But each role is slim. Only Fox’s old-timer has much to say or do.

Plater suggests there is a high price to pay for plays yet doesn’t explore this idea enough. Another author kills himself. But this offstage character isn’t vivid enough to have much impact. What interests is Peggy’s cold reaction to the death. Indeed, all the way through the play, it’s Peggy who interests most.

A great source of anecdotes and one-liners, Plater gives a wonderful depiction of his own agent. Explicit that the play is “a pack of lies”, the strategy aims at creating a portrait close to the truth. His Peggy is complex and entertaining, the depiction cleverly affectionate while acknowledging her many faults.

Taking this starring role, Tamsin Greig’s performance is phenomenal. It would be all too easy to exaggerate this larger than life woman. Greig, while always funny, shows incredible control. Volatile emotions and a sharp intellect are clear, imperiousness is balanced with vulnerability. Ramsay was a woman to watch and Greig mirrors this – the performance makes for compulsive viewing. A bully the wrong side of loveable eccentricity, a passion for danger gives the character edge. Does Peggy’s commitment to the theatre excuse it all? No, but Peggy will choose a pub theatre over the National, and who doesn’t admire that?