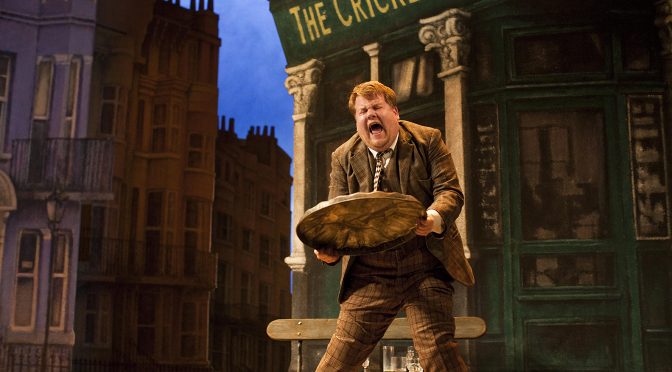 The National Theatre’s decision to release recordings from its cinema broadcasts on YouTube while the country is on lockdown is hugely welcome. Starved of theatre in these troubled times the announcement was a genuine boost that many, myself included, are grateful for.

First up is a smash hit from 2014. Richard Bean’s adaptation of Carlo Goldoni’s commedia dell’arte play, whose title tells us its plot, is sure to provide much needed laughs. The sense of a good night out is conveyed even on a screen and I ended up enjoying the show more than first time around.

Energetically directed by Nicholas Hytner, this is theatre that seeks gags shamelessly. Bean’s hard-working script is packed with jokes: silly, slapstick, crude and cruel, using rhyming slang and old-fashioned tongue twisters. Best of all are the surreal similes that really tickle: next time anyone is unwelcome, please compare them to a “big horse in a pub” and anything unpredictable to “a wasp in a shop window”.

Heading up the hard-working text, which Hytner never allows to slack, with appropriate vim is the man of the title, James Corden. A natural “clown” and “geezer”, Corden excels with the show’s audience participation and his physical comedy is accomplished. But for my money the guvnors are the stars – two lovers in hiding who both happen to hire him as help, played by Jemima Rooper and Oliver Chris. Neither wastes a single line (Chris is especially funny), but they also make us care for their characters on the run. No matter how stupid things get, we don’t doubt their love. And, in a play that seldom pauses for breath, the moments when they believe the other has died prove especially poignant

One Man Two Guvnors is the perfect choice to start this digital season – it’s hard to imagine who wouldn’t enjoy the piece. An exciting selection of shows lies ahead, released for one week every Thursday, as some compensation while we can’t visit the South Bank in person.