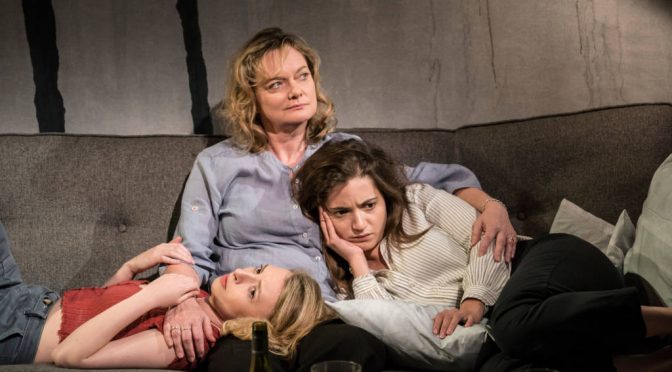 If you’ve ever used #opendoor in the charitable spirit of helping a stranger, then Cordelia Lynn’s new play presents a challenge. Using the scenario of a terrorist attack, with one middle-class family trying to be of use, Lynn hosts a struggle between generations and exposes tensions in our society with a degree of honesty that’s as uncomfortable and insightful as it is funny.

Emma and Bill are the baby boomers who open their home to John, who is in need of safety for the night. But the invitation to stay is issued by their daughters. And it doesn’t take long for suspicions about John’s backpack to foul the atmosphere. How quickly did you wonder why he wouldn’t take off his coat?

Emma and Bill were idealistic… sorry, are idealistic… but “realistic, too, now”. All that liberal angst and first-world privilege makes these great roles for Sarah Woodward – truly commanding – and Neil Dudgeon, whose emasculation is the stuff of Daily Mail nightmares. Full of fear, then guilt about that fear, they fall over themselves to accommodate, and stand their ground. Lynn mines the couple’s parenting methods with chilling skill.

Their two bundles of joy are Imogen and Chloe, played with aplomb by Pearl Chanda and Kitty Archer, straight from Millennial casting. “We’re not girls, we’re women,” they cry – instantly and in unison. Correct, of course, but parroted? Their naivety comes close to incredible, and Lynn treads a fine line in making them believable. Or perhaps it’s the other way around? Younger audiences might feel that it’s the parents who are caricatures. Wherever your sympathies, lie Lynn plays with them to perfection.

There is a stumble, with the role of the family’s caller, who inspects… but doesn’t bear much inspection himself. Capably performed by Irfan Shamji, it’s clear an effort has been made to make John more than a device, but he is a still too much of a foil (an uncomfortable irony for the noble intentions here). But this is small blip in an outstanding script, and director James Macdonald does a superb job throughout, injecting considerable tension that adds a charge to the comedy.

The delicious satire would be enough to recommend the play, but Lynn has loftier aims. Chanda’s character comes to dominate after the interval, and her performance goes from strength to strength. Ideas take over as One For Sorrow becomes more intense, increasingly bizarre and didactic. The potential relationship between Imogen and John forms a kind of test for cultures. Think A Passage to India with overtones of Adam and Eve! It makes the literal incomprehension between them – magpies come into it and it’s too brilliant to spoil – ultimately bleak. The suggestion that our comfortable homes and lives may be not just vulnerable, but actually the catalyst for danger, is a stretch. But the writing is of such consistent quality that it deserves the utmost respect.