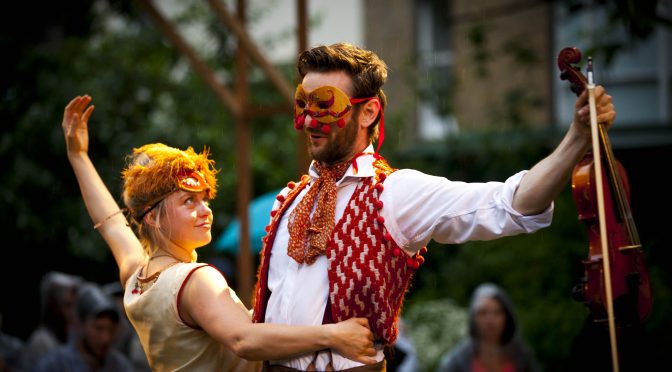 Damp weather did nothing to deter the Iris Theatre Company last night at the opening of its summer season. Comfortably resident at ‘The Actors’ Church’, it always expertly navigates the grounds and building for its promenade performances. Director Amy Draper’s production of Shakespeare’s romantic comedy is no exception, and proves funny and heart-warming, whatever the weather.

The best thing about Iris Theatre’s shows sounds boring – that you can hear every word. This is no small achievement when actors are unmiked, outdoors and competing with all and sundry in the Piazza. While the declamatory acting style can be off-putting, Draper’s performers make exaggeration work for them, emphasising the tricks and tales, including nasty plots, our four lovers have to endure.

This is a stripped-back show, with only seven in the cast, and you might wish for more, even though the ensemble delivers. Jennifer Clement is particularly hard working: despite plenty of costume changes, she’s never breathless and has terrific comedy skills. Emma McDonald benefits from the economy, performing as a sweet Hero, and then ordering the audience about as a belligerent Dogberry, the “ass” heading up the Prince’s Watch. Abbreviating this sometimes-tiresome bunch into a Keystone Cops couple really works, and their marshalling the audience around the grounds is clever stuff.

Anne-Marie Piazza is a brilliant police officer alongside McDonald, climbing lampposts and stealing snacks from the crowd. Yet this isn’t her main achievement – her Beatrice is top notch. Funny, bike riding, accordion playing… is there nothing the woman cannot do? Joined by Nick Howard-Brown (another natural comedian) as a charming Benedick, the querulous couple’s bickering and courtship is the highlight of this speedy, accomplished and appealing show.