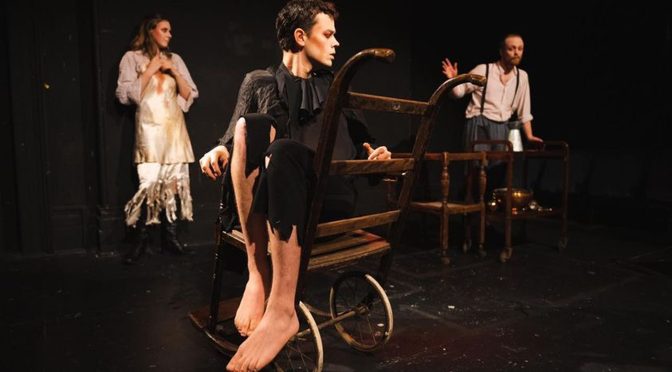 Post-apocalyptic scenarios are periodically popular in theatre but a genre with plenty of clichés can prove tricky to make your own. Playwright Andrew Mapperley adds elements of horror and fairy tale to his sketch of “lovers at the end of the world” that show originality. The play doesn’t lack ambition and is sure to hold your interest.

The world created is unsettling but too confusing. Detail may not interest Mapperley but an audience tends to like some, or at least, trying to work out what catastrophe has happened can be a distraction. The make-up and costumes here don’t help – there is a lot of oddity for its own sake.

At a guess, Chekhov is an influence – the family members we meet are all waiting and longing for something. And J.B. Priestley:  there’s a lot about reality and time as well as a kind of Inspector – a spooky role that Caitlin Lee Smith does well with. More importantly, Mapperley uses whatever inspiration to his own ends presenting a distinctive, if unrestrained, set of concerns.

The language is stilted and elaborate with a biblical feel; none of this is to every taste, a lot of it is clunky, but the mix shows courage. The cast make the dialogue work and give performances to be proud of. Joseph Wood has the very difficult role of the family grandfather which he performs with confidence and conviction. Mapperley, Kat Stidston and Giulia Hallworth play three siblings with plenty of problems; the latter, with her tenuous grip on reality, proves far the most memorable.

Much of the imagery is powerful and touches on the play’s biggest strength…but also weakness – the sheer amount of neurosis in Mouthful of Fingers. The end of the world and radiation are not these guys biggest problems! There are macabre stories and dreams that would delight an analyst, enough OCD to go around with sexual frustration and hemophobia for good measure. Questions of history and inheritance are also thrown in. Credit for cramming – a lot of the anxiety hits home and the atmosphere is suitably tense – but the play is overloaded. And characters come too close to being defined by their ailments.

Elisabetha Gruener’s direction is firm and restrained – clearly appreciating the play needs no further histrionics. But it’s still a puzzle. The age and fate of Volvo, a role played tenderly by Rens Tesink, is problematic. Many of the stories started don’t have an ending, a bold idea but one most listeners find frustrating. Riddles can be intriguing – and dramatically effective – but it doesn’t hurt to help an audience out a little.

Photo by Hayley and Kyle Madden