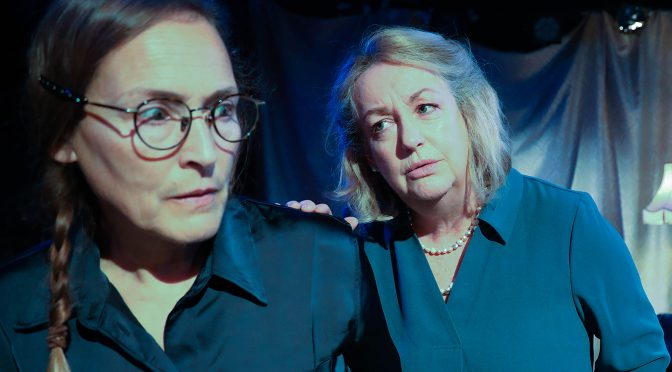 Tom Stoppard fans might venture out to this clever two-hander to see how the playwright Pavel Kohout influenced his work. But the piece deserves a larger audience, as its excellent script debates art and history – and the interaction between the two – with economy and emotional power.

The scenario is simple – an ‘I’m your biggest fan’ kind of visit to a wealthy novelist. There’s suspense, as it’s clear the intense Irene isn’t simply nervous about meeting an author, while the urbane writer Zofia has something to hide. Peter Kavanagh’s tense direction (aided by some classy lighting) has touches of Hitchcock of Highsmith. What’s not to like already?

The power play between the two women is exciting. These are meaty roles that Lise-Ann McLaughlin and Philippa Heimann clearly relish. I’m not sure Irene needs such a strong accent (she has spent most of her life in the UK), but the delivery is good. And Zofia’s frailty doesn’t quite convince, despite an excellent performance from McLaughlin. But this is solid work on characters that could be defined solely by issues, and both performers make them full of life with a palpable sense of their histories. There are also great twists for both, as Kohout plays with who we feel sorry for, or admire, more.

“A voice to her scream”

So, lots to praise. But neither the craftsmanship nor the production’s strengths form the best part of Cyanide at 5! The real satisfaction comes from an intelligent script with a surprisingly light examination of the role of art, alongside a powerful insight into the history of the Holocaust. Kohout isn’t intimidated by either big topic. Zofia defends her book’s profitability because she gave a voice to a victim – but most of her defence is less lyrical. The big concern is authenticity. Yet we’re asked to think about the publishing industry and celebrity alongside how books affect their readers.

As for the power of art, Zofia’s book – and its questioned status as fiction – comes into dramatic conflict with real life. Irene was a refugee, smuggled out of wartime Poland. Zofia has become rich but has lost a lot. Irene’s dangerous anger is overpowering… is it fair? And how well does Zofia’s justification for her carefully revealed actions work? Kohout’s open-ended conclusion is fitting, given the sophistication of emotions and arguments presented.