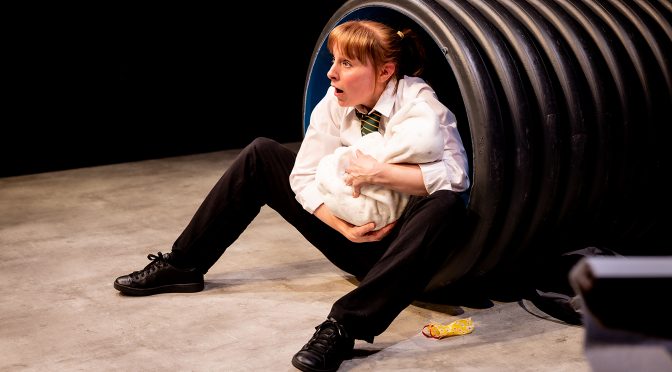 Abigail Hood’s disturbing play works hard at being hard hitting. Tackling so much trauma – including the death of a child – ensures the drama is powerful. And the show is well performed, despite the bumpy script. But be prepared, the show is not for the faint hearted.

Kayleigh and Caitlin (Hood and Zoe Douglas) are schoolgirl lovers, and their affair is well depicted. Although they are both old for their age, with difficult backgrounds, Hood manages to remind us that they are still children. The girls are endearing and the humour is strong. But laughs stop quickly, and the play explodes in an exaggerated fashion.

An episodic structure, handled at a breakneck pace by director and dramaturg Kevin Tomlinson, feels horribly rushed. There’s little wrong with any of the scenes but all are so short that none quite satisfies. Secondary characters suffer. Although well performed by Gillian Kirkpatrick and Emma Keele, Kayleigh’s mother and a well-meaning schoolteacher do not convince. The former is a religious maniac/prostitute and the latter another victim of abuse seeking to “save” the young girl. Grim is fine, but sketchy proves frustrating.

There is a welcome change of pace after the interval. A calmer approach brings more depth. Set after Kayleigh’s release from prison, the aftermath of her crime is examined in more detail.  The scenario is contrived and the dialogue clunky, even clichéd. But observing how events have changed all the characters leads to good performances (and, since he hasn’t been mentioned yet, Kevin Wathen has a superb scene).

Might there be a too much sympathy for the monster of the title? Kayleigh is a fascinating character, from a smart girl with “no filter” to a woman genuinely haunted by what she has done. Hood conveys all this superbly, with a depiction so determined to be empathetic that it becomes bold and raises interesting questions. Despite problems in the script, which never hold the cast back, it’s interesting and brave to face the monstrous like this.