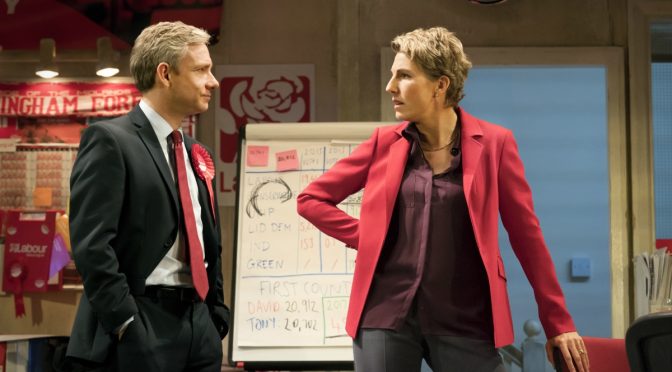 Thirty years of a political party’s history doesn’t sound like a West End hit. But, as this new play by James Graham joins the transfer of his Ink just down the road, you can’t question the young playwright’s commercial acumen. I am sure someone has worked out the last time a living writer had two new plays performing at the same time – it doesn’t happen often and is to be celebrated. Graham’s talent is obvious – the strength of his writing lies in his humour, and Labour of Love is funny from start to finish.

There’s a conventional love story here, which develops a little too late, between the MP whose career we follow and his constituency secretary, Jean. Their fumbling romance is sweet and gets laughs. There’s love of a place, too: a concerted effort to depict the constituency as a character, detailing the destruction of a community. It’s a shame that the Nottingham location is depicted as The North – it isn’t, it’s The Midlands. Pushing accents geographically up the country must have been a conscious decision, but seems odd given how thorough Graham’s research is. But it’s really the love of the Labour Party that is interesting.

The history is entertaining, the observations acute, the use of hindsight effective and all of it is, yes, funny. Graham has written a lot about politics and his satire is distinctive. He seldom doubts the good intentions of our rulers and portrays them as human. While many would succumb to cynicism, Graham resists, which makes his work level headed and quietly inspirational.

Taking the leads are Martin Freeman as the amiable MP and Tamsin Greig as Jean. The comic timing of both is immaculate. Freeman is given more to work with when developing his character, and he suggests the passage of time in the play effectively. However, the play belongs to Jean. A card-carrying member of the party since she was 12 (she lied about her age), with a sincerity and passion that is palpable, her plain speaking and fruity swearing make her irresistible.

Jeremy Herrin’s direction is clear and thorough – the competency of the cast and strength of the script mean fancy touches aren’t necessary. Going backwards then forwards in time means it helps to know the history a little, as the archive footage offered isn’t quite enough. I feared for an American contingent of Freeman fanatics, but they seemed to enjoy themselves enormously. Graham isn’t shy of a bad pun or lame joke – he provides both with remarkable rapidity. Freeman and Greig tackle the speed of the gags with ease, making each and every one a winner.