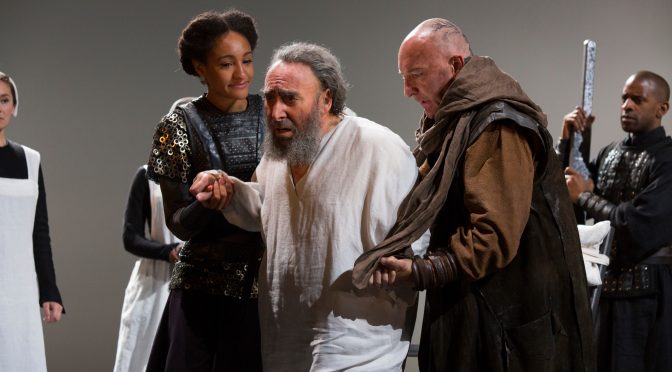 Gregory Doran and Antony Sher consistently turn out gold-standard work for the RSC. Their latest offering from Stratford is Shakespeare’s tragic monarch – a big challenge no matter how good your credentials – and they deliver in predictably impeccable style. Here, Lear is presented as a pagan priest. With Celtic touches from designerNiki Turner and an imperiousness from Sher that few could match, exhortations to the gods make a lot of sense. And there are plenty of well-used supernumeraries: Lear’s “insolent retinue” of Knights are out in force, while the unwashed masses that the king has neglected are there from the start. The additions, on top of traditional foundations, ensure interest and create a grand scale.

Despite Doran’s keen eye on the extras, Sher’s Lear has been allowed to overpower the production. The rest of the cast includes some fine performances, but other roles struggle to make a mark. One exception is Antony Byrne’s Kent, whose transformation into Caius is so fine that you almost believe he’s unrecognisable. Another is Paapa Essiedu’s Edmund. The parallel plot of the elderly Gloucester’s trials and his bastard son’s betrayal is delivered with intelligence and vigour. Essiedu joins the list of ones to watch.

As for Sher in the title role, while it has to be admitted that he takes few gambles, his delivery never fails. This is a physically frail old king, whose movements seem limited and difficult. Oddly, this fails to generate the sympathy you might expect and means tension slacks at some points when Lear should still seem capable of violent assault. But it’s a classy affair with key speeches marked out (it’s easy to imagine the pages turned down in a copy of the text), and Sher always sounds splendid. His charismatic presence further consolidates our monumental impression of this colossal production.