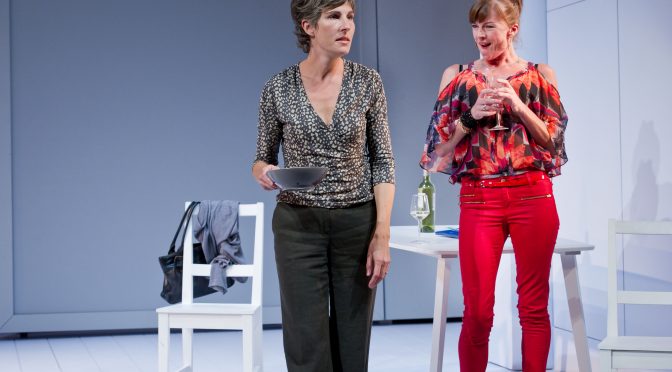 There’s a reason plays about generational conflict are perennial – they make great dramas. April De Angelis’ new play Jumpy is no exception. With a nod to the classics, and great observations on modern life, the focus here is on a mother and daughter relationship as funny as it is fraught.

Tilly is an odious teenager. Bel Powley plays her superbly, making the most out of her deliberately inarticulate character, full of shocking yet recognisable spite and ignorance. The Royal Court audience seems full of mothers nodding and sometimes glancing at the shame-faced teenagers they have dragged along. They deserve this sweet compensation. Surely, like Tilly’s mother Hilary, they are good parents – but still suffer. The “brand of exquisite torture” Tilly inflicts is funny, but the real joy is to laugh at the teenagers as much as the middle-aged.

De Angelis has written some strong male characters in Jumpy. There is a fine performance from Ewan Stewart as Hilary’s husband and Richard Lintern is deliciously credible as Roland, an oily divorcee whose clichéd mid-life crisis pails in comparison with the women in the piece. Hilary’s friend Francis (Doon Mackichan) takes up burlesque dancing, with “post-feminist irony” of course, in a scene that is one of the funniest you will see on stage this year.

But Francis, who characterises being 50 as a “crisis”, can’t match our “mental-pausal” heroine Hilary. It is a role Tamsin Greig excels in – and she holds the audience whether she’s wisecracking or weeping. A former protestor at Greenham Common (kind of), still keen on good deeds and personal projects, she reads Dickens and has Great Expectations for her daughter but is full of “wobbles”. Greig is marvellous at injecting pathos into her struggle. De Angelis’ text skates over issues and leaves plot points hanging, so the play’s most poignant moments, which really are moving, are down to Greig’s performance.

It isn’t fair to extol Greig exclusively. The supporting cast are too strong for that. Powley in particular is an actress it is safe to say we will see more of, and De Angelis is a great comic writer. This is a play not to be missed – and take a teenager if you can.

Written 26 October 2011 for The London Magazine