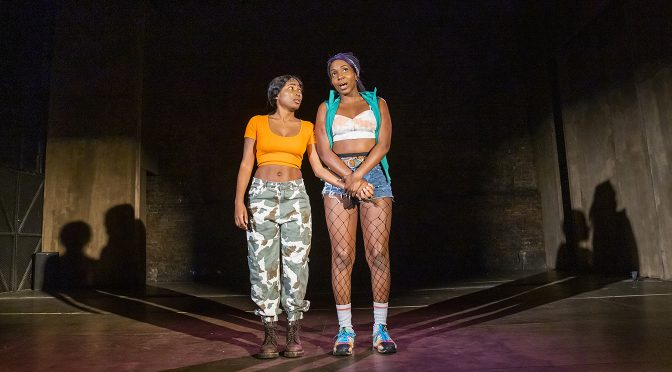 Whether young, middle-aged or old, the women in Aleshea Harris’ play are tired. Traumatised, abused, abandoned – or all three – what drives them is anger. Revenge and rage take their toll, but for the 90-minute duration of Is God Is they create an exhilarating piece – it’s the characters and not the audience who are exhausted.

A hit in New York, the play is a good fit for the Royal Court, where we expect to see the engaging of big themes and explorations of dialogue and theatrical form. And we’re used to a dark sense of humour, which this play takes to an extreme. Is God Is succeeds all round and stands out as original.

Harris’ use of dialect and characters’ deliberate inarticulacy is sophisticated. There are influences from hip-hop and Afropunk (excuse my ignorance – I’m trusting the back of the script on that). But the blunt statements and a new level of deadpan understatement make this murderous revenge story very funny.

As for form, the road trip that twins Racine and Anaia embark on engages with movies as much as the theatre. It’s an Americana tour from the “dirty South” to a not-so-wild West that ends with a showdown. The acceptance of a circle of violence is seldom questioned – as in a movie – which is surprisingly unsettling on stage. In her mad mash-up of Cain and Abel with an inverted sacrifice of Isaac, Harris isn’t scared to create a satire of biblical proportions.

Serious subjects? The title is hardly subtle. The twins’ long-missing mother is immediately and inexplicably identified as God. And ‘She’ issues the mission of murdering their father! Harris makes sure we question free will and plays with plenty of excuses for all kinds of inexcusable behaviour. Messages and morals are skilfully slippery, and audience complicity in blood lust manipulated. For all that praise, the larger motives behind Is God Is get lost.

Firstly, some especially vivid characters prove distracting. This isn’t an even-handed issue. With the men in the show the best we get is Mark Monero’s crisp father (who only appears in the penultimate scene). But the women in the play are – in every sense – fantastic. Both Cecilia Noble and Vivienne Acheampong, two very different kinds of mothers, have great roles that they develop marvellously. More of Acheampong’s Angie would be welcome: this bored housewife, who has her own plans, adds to the mix immeasurably. As for the leads – Tamara Lawrance and Adelayo Adedayo – are barely off the stage and don’t so much hold attention as grab and throttle it: “hard end” Racine and the emotional Anaia are a consistent, entertaining and invigorating pair.

Despite the bizarre premise and having its tongue firmly in its cheek (it really is funny) Is God Is triumphs with its plotting. How old fashioned! Ola Ince’s direction, and a set full of fun and signposts from Chloe Lamford, make this bloody journey breakneck. No matter how crazy, the story is driven impeccably. Gory and tense as well as sometimes silly makes for a fascinating and memorable production.