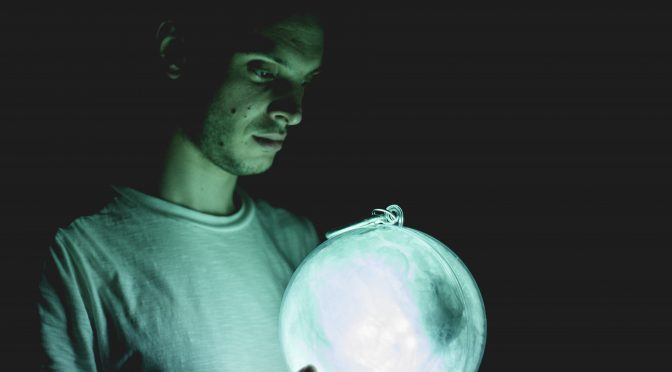 Piers Black’s monologue provides a look at modern masculinity and movies through the character of Toby – an apprehensive astronomer, who, bless him, is far more diffident than he should be. Toby’s love life is combined with a fantasy about saving the world, inspired by action films. As Toby imagines the man he wants to be – as compensation for feeling small, stupid, and scared – a tale unfolds that is slim but sweet.

It’s hard not to see Catching Comets in relation to lots of men that theatre-makers have shown us lately. Toby is a good bloke – surprisingly, annoyingly so: apologetic to a fault and deliberately far from toxic. But, despite the recognition that many models of masculinity are just silly, what to replace them with is a bigger question. There’s a strange preoccupation here that apologising is a failing. And there’s an anger in the character that Black could explore more. Regrettably, the woman Toby loves (his “magical time-melting girl” – nice phrase) is a shadowy figure. As with “the best friend” Emma, Black’s women are too indulgent and a touch saintly.

It’s possible that discussing toxic masculinity brings about the kind of ‘A-Level’ analysis that annoys Toby. After all, Catching Comets is a comedy. The humour is a mixed bag, though. Toby’s insecurities are – regrettably – predictable and repetitive. It’s hard to laugh too hard at a character you feel sorry for. The jokes around the spoof action film in Toby’s head are much better. With clever parallels to the character’s ‘real’ life, appearing at moments of stress, the Bond-style hero is shown as truly ridiculous. The details are great (I loved his coat, described as “newly polished Jaguar fur”).

There’s no doubt Catching Comets is a great showcase for performer Alastair Michael. With help from Black’s direction (as well as Chi-San Howard as movement director) Michael’s physicality is impressive. He does well with the contrast between Toby’s timidity and his action hero alter ego, as well as cameo characters. Best of all, Michael sets up a great rapport with the audience. Oh, and his comedy Dutch accent is brilliant.

Not surprisingly, resolution is a lot to ask from Black. We know how action movies end… and, disappointingly, it isn’t much of a spoiler to mention the conclusion of Catching Comets.

Having criticised Hollywood heroes, Black has backed himself into a corner – and ends up leaving Toby hanging. But denying us a happy ending feels a let-down, especially when there have been plenty of laughs. It’s a testament to Toby winning us over that is seems a shame he can’t sort out what kind of hero he might really be. At least there’s plenty of room for a sequel.