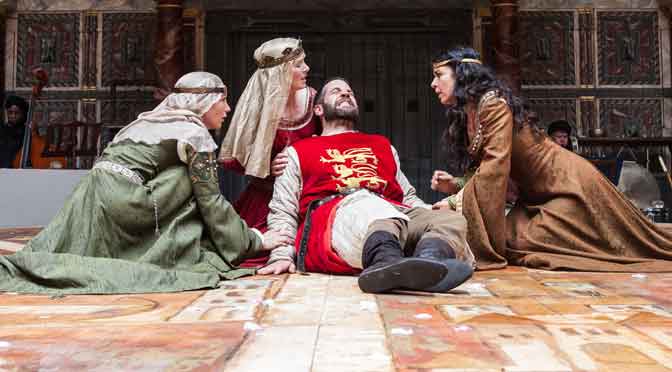 It’s set to be an exciting year for new writing at Shakespeare’s Globe Theatre, with premieres from Howard Brenton and Richard Bean. But first comes Holy Warriors by David Eldridge, which looks at religious conflict in the Middle East by focusing on the crusades. Sadly, it could barely be more topical.

Shakespeare and the Globe appropriately shape the play. With a nod to the History Plays, the play begins with the conflict between Richard the Lionheart and Saladin. It’s fascinating stuff, but note that you really have to concentrate: history, politics and religion don’t make for an easy mix.
Next we see Richard in a fantastical after life, as he is brought up to date with the West’s subsequent adventures in the East by an all singing and dancing pageant that includes Napoleon and George Bush. Eldridge’s allegorical touches give the piece the air of a Jacobean masque. It’s a shame that Elena Langer’s music is distractingly close to clichéd.
This central scene shows the strength of James Dacre’s direction, yet despite their numbers, the cast still have too much to do. Geraldine Alexander as Eleanor of Aquitaine delivers the play’s most rousing speech in style, and credit has to go to Philip Correia for his turn as Tony Blair. But it’s all a little too close to a game in which you have to work out who’s who or, if you are cleverer than I, which period of history is being picked out.

Richard has to “look, listen and decide” as he is given the chance to reenact his actions and learn from history. John Hopkins, who plays Richard, impresses. Of course, there’s no danger of a plot spoiler – we know he’ll make the same mistakes – so updating the scenes, after a fashion, and having lots of gunshots just seems rather depressing.

How could a play about politics and religious fanaticism be anything but grim? Presenting “800 years as one” really brings that home, and attempts at humour ring hollow. The play is sure to divide opinion, not least with its mix of styles. I preferred the history to the fantasy – Alexander Siddig’s Saladin is a fascinating character, but you might disagree. It’s seems impossible not to be controversial about this topic but Holy Warriors seems intelligently impartial – that at least is an achievement.

Written 24 July 2014 for The London Magazine