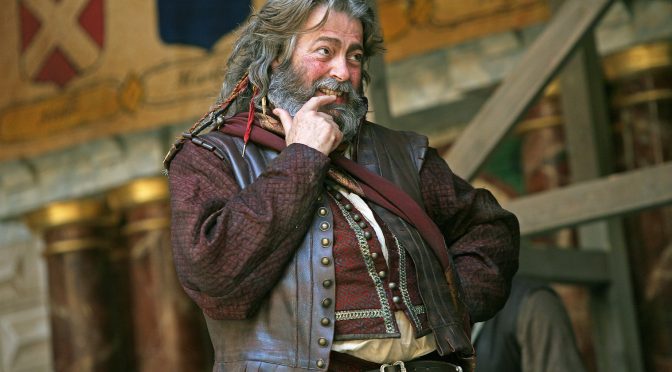 This year’s terrific Kings and Rogues season at Shakespeare’s Globe gives us the theatre’s first production of Henry IV Parts 1 and 2. Under the direction of Dominic Dromgoole, the plays thrive on the clarity and immediacy of the venue. With the cast Dromgoole has assembled the plays receive the complex subtlety they deserve.

First for the king. Suitably careworn from the start, Oliver Cotton’s Henry IV has a fiery temper that encompasses both the passionate young man he once was and the disgruntled father he has become. In plays so concerned with the theme of age, he manages to convey the journey of a life time.

Then there are those who would be kings. Jamie Parker (fittingly, a member of the original History Boys cast) plays Prince Hal with an eye on the time. He has huge fun with the low-life company he keeps but also shows a cold edge that, for all Parker’s charm, is unsettling.
Sam Crane’s Hotspur also plays it for laughs, which makes him less of a foil to the dissolute Prince. His performance has perhaps too much of the puff-chested schoolboy about it to create the required tension as he leads his men into rebellion and bloodshed.

And now to the rogue – Falstaff, that “villainous, abominable misleader of youth”. Like Elizabeth I, we all fall in love with Sir John. Especially this one. Shakespeare gives him a lot to work with, but Roger Allam doesn’t miss a trick – he squeezes every last drop of comedy out of the text and adds some of his own. His Falstaff is urbane, fey and philosophical. He is also crude, reckless and (unusually) sexy. With impeccable timing and joyous physicality he is, oh, such good company.

Allam’s genius is to embrace the theatricality of the character – Falstaff loves being on show and Allam uses the particular intimacy of The Globe to great effect. The character doesn’t just perform in those famous tavern scenes. He also gets turns as wrestler Giant Haystacks in a Pythonesque moment where a superb Mistress Quickly (Barbara Marten) threatens him with a dead fish. And he is a passable Barry White figure, with Jade Williams’ fantastic Doll Tearsheet swooning at his charms. And who could blame her? With Allam in total, joyous control, we are all a little heady from the performance. This Falstaff is faultless.

But Falstaff isn’t irresistible to all. The fun cannot last and in Part 2 we see that the piper, in the form of the recorder-playing Hal, has to be paid. Solemnity sets in as the kingdom in turmoil takes its toll. There are still laughs but they start to sound hollow as the characters succumb to fatigue and stress.

Allam injects an escalating unease. Increasingly sordid and diseased, Falstaff is compelled to continue his charade as a soldier and this is one spotlight he isn’t comfortable in. Estranged from Hal, he is forced into plotting a poor joke against the charmingly doddery Shallow (William Gaunt). He never gets to tell the punchline. Appearing as an exhausted Bacchus, the energy passes to Jamie Parker who returns as a demented Pistol. Behind the euphoria at Hal’s ascendency we sense fear.

Henry IV Parts 1 and 2 are epic plays. The history they write takes in the whole of the country and also the span of man’s life. It is to Dromgoole’s credit that this twin focus is never lost. Lording it over all is the epitome of life itself – Falstaff. In all of his joy and his pain Allam’s rogue is truly magisterial.

Written 15 July 2010 for The London Magazine