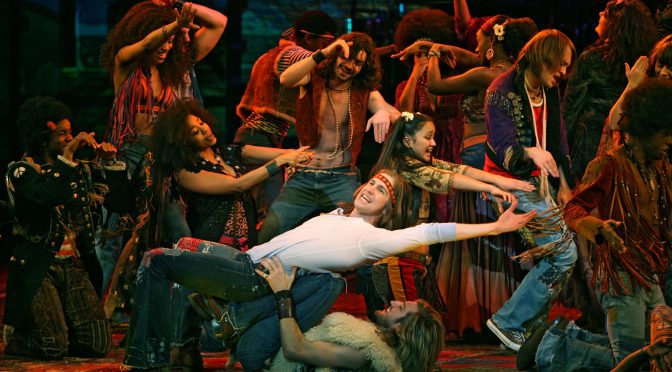 Hair is an important show. It was the first rock musical, first production to feature nudity on a British stage and the first US show to give equal billing to black performers. A huge success, it came to symbolise the counter culture movement of the late 1960s. Yet while the cast sing about the dawn of the age of Aquarius many astrologer’s say it happened in 1997. Hair might be important, but is it worth reviving?

New York’s Public Theater, who have arrived in London en masse, obviously think so. The energy and conviction of this production is clear from the start and it never wavers. This in itself is intoxicating. Add all the wonderful songs, skilfully orchestrated by their composer Galt MacDermot, with strong singers and you are sure to have a great night out.

Hair isn’t going to shock anymore. Actors taking off their clothes and swearing won’t even raise eyebrows. But director Diane Paulus knows this. The nudity is handled in a tasteful, almost dismissive way. The sexual explicitness is cleverly played for laughs. What Paulus seems to have used this bawdy content for it to bring together the huge cast so that they convincingly play ‘the tribe’ that Hair is all about – there is a fantastic sense of this group as a community.

This exploration of a society is more important than the plot, which after all is thin. Claude, played by Gavin Creel, is about to be drafted. A modern day Hamlet, he finds his obligations pressing down on him as his youth comes to an end. Responsibilities weigh on him to the extent that he wants to become invisible – his particular articulation that his too solid flesh should melt. Creel is outstanding in portraying this angst and his character’s journey. That’s a big achievement given the similarly gifted performers who share the stage.

Will Swenson’s Berger has the crowd on side from the first with some inspired adlibbing. His physicality and almost animal presence make his role as the tribe’s resident stud entirely believable. (I always suspected some people did better out of free love than others and now I have proof). As a further qualification for the role he has magnificent hair. Shining, gleaming, streaming hair – which he puts to great use. It almost made me wish I still had long hair myself. And there would have been plenty of opportunities to join in. The cast are continually addressing and mingling with the audience. There is even the chance to go on stage at the end (albeit with health and safety restrictions dutiful observed). Although all this running around can seem slightly lost in the Edwardian grandeur of the Gielgud, it’s a great deal of fun and a real crowd pleaser.

What’s important about all this audience participation is that the emphasis is on sharing – the tribe want us to experience with them. This makes the evening joyous and also, as Claude’s story comes to its end, surprisingly poignant. Although contemporary events are never alluded to, the fashion in soldiers’ uniforms doesn’t change much and it must be in everyone’s mind that young Americans are still dying in battle today.

It’s easy to knock the hippies. If you aren’t a child of the baby boomers then those lauding the 60s can seem annoyingly insistent. Even if the spirit that Hair embodies so well can sometimes seem naïve, this revival serves to make us question any superiority we might slip into. Are we really more rebellious than those who broke down so much social conformism? The question becomes; how does the age of Aquarius that we live in compare to the one that was so compellingly sought.