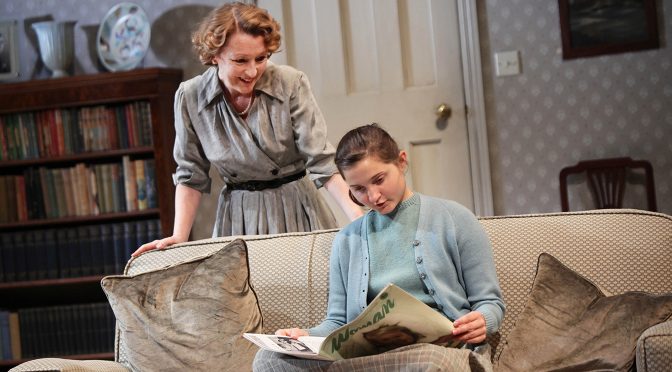 The way Mike Leigh makes a play is unlike anyone else. His new work, Grief at the National Theatre, was devised in collaboration with his cast and crew, in secret and from scratch. The result is something very special indeed.

The story of a 1950s war widow and the life she shares with her brother and only child is grim. The period detail of repressed emotion is familiar ground but Leigh presents it devoid of cliché – we see the price paid for such control and it isn’t pretty.

The long period of gestation that made the play results in an investment from the cast that produces magnificent performances. Lesley Manville has created one of the finest roles of her career: continually on brink of tears, the way she holds back is astonishing. Joined by Ruby Bentall, in a remarkable performance as her troubled daughter, as well as a host of other Leigh regulars – this is one of the finest ensemble you will see onstage in London at the moment.

Ironically, the quality of the acting makes Grief very hard to watch. For a play obsessed with death there are some very funny lines, but there is a sting in the tale: each laugh brings us closer to the characters, makes them seem unbearably real. The sense of foreboding Leigh manipulates in the audience becomes cruelly oppressive.

Be warned. The dark denouement that ends Grief is shocking and deeply disturbing. Manville’s final break down is harrowing: occurring offstage the effect is akin to Timanthes depiction of Agamemnon, covering his face to hide his pain, and all the more harrowing for being unseen. The plays rejection of any resolution makes it one of the most powerful nights at the theatre you can imagine.