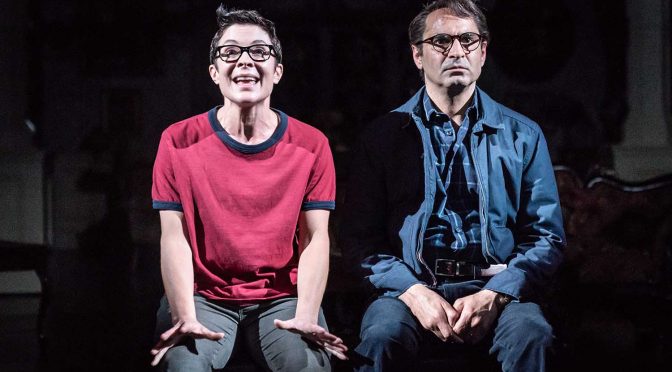 Jeanine Tesori’s Tony award-winning musical is deceptively simple. It’s a modest story of family tragedy, a shell marriage and a suicide that is never overplayed. The lyrics, by Lisa Kron, are seldom flashy but always smart. Tesori’s music is beautiful, but folksy rather than symphonic. Such restraint takes sophistication. And the show’s aim, of a truthful search into the past, gains sincerity and emotional power through prudent understatement.

Based on the graphic novel by Alison Bechdel, it is the artist’s wish to paint “a picture of my father” that we are privileged to see performed. Bechdel is a lesbian and her father slept with men. Rather than supporting one another, in the style of the Gay Union Bechdel joins at college, repressed embarrassment and his frustrated life remain the consistent note. The roles make great parts for Kaisa Hammarlund and Zubin Varla, who are commanding throughout. But note: there are no sentimental pleas for understanding, no claims for revelations. Instead, what’s special about the tone of the piece is that no apologies are made. And there is a refreshing joy about Bechdel’s sexuality, with two songs of discovery – as a child and at college – that are highlights. Bechdel’s mother gets a fair turn, too, brilliantly portrayed by Jenna Russell. Again, there are no answers or explanations as to why she would stay in this marriage, but a bare dignity that is deeply moving.

The production from director Sam Gold is exemplary in its understanding of the piece – nothing distracts from the excellent storytelling and there isn’t a soap box in sight. And Gold gets strong performances from his child performers – indeed the acting all around is superb. Final praise goes to designer David Zinn for a stunning set that embodies the show: a rotating circle of furniture shows Bechdel’s obsession with bird’s-eye views, then a section in New York uses lighting to create comic book style panels, and finally the family home is revealed like a doll’s house. In each case, the point is clear and direct, forceful and impeccably well drawn.