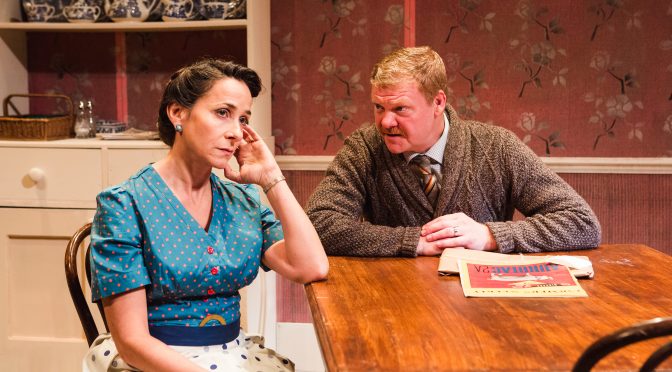 Pursuing this excellent venue’s tactic of rediscovering plays, director Benjamin Whitrow offers a fine revival of a well-written and intriguing text from 1957, which is enjoying its first London production since its premiere. Writer Robert Bolt, of A Man For All Seasons fame, is the author of this quietly profound domestic drama of dreams and divorce.

Jim Cherry wants an orchard like the one he grew up on, and drives his family mad with dreams of it. It’s an obsession fuelled by a love of scrumpy cider that’s so bad as to be called a “hallucination” at one point. Liam McKenna does well to show us his character’s instability in this difficult lead role. But will his dream be the death of this salesman?

Our sympathies swing against the charismatic Jim as his delusions and drunkenness increase. Still, his children’s disdain, well evoked by James Musgrave and Hannah Morrish, is disconcerting. Bolt is precise in his depiction of intergenerational conflict, even if plummy accents raise a smile. More problematic is the kids’ flirtatious friend Carol, with whom everyone falls in love. Phoebe Sparrow portrays this ambiguous cool cat who toys with any mice tempted to play with her.

It’s Jim’s wife Isobel who becomes the centre of the play, with credit due to Catherine Kanter’s skill in the role. A mercurial character, possibly a little too admirable or patient to be believed, more time might have be given her mood swings by Whitrow, but Kanter commands attention as the extent of her suffering dawns on the audience. Isobel’s “bones are tender” with the continual pressure of her husband’s “cardboard prospects” and she grows into a powerful figure who, it is hoped will be the one to blossom.