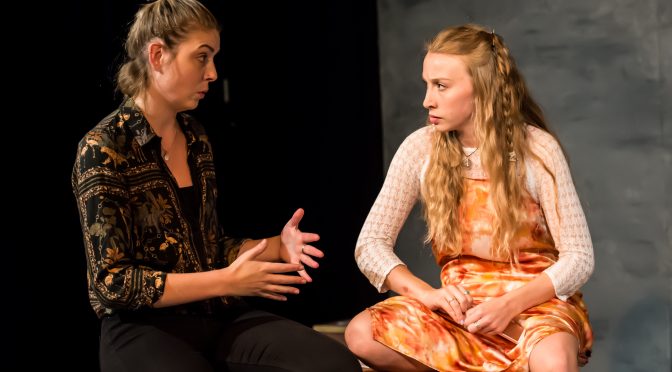 This welcome revival of an early work by Penelope Skinner, which premiered in 2010 at The Bush, boasts an excellent cast and strong direction from Georgie Staight. It’s a text that’s difficult to pin down – playing with the audience while making serious points – and Staight appreciates the piece’s changes of tempo. There are laughs, handled well by the cast, as well as plenty of ideas and gruesome moments that require a strong stomach. All in all, Eigengrau ends up a challenge, but the play and this production are a definite go-see.

Skinner sets up some straw men and women for us to meet. It’s pretty easy to get a laugh out of them… but it’s still funny. There’s feminist Cassie and her new flatmate “off Gumtree” Rose, the latter’s one-night stand, smarmy successful Mark, and his school chum Tim, who isn’t doing so well. The cast take it all in their stride, with Staight controlling some of the exaggerations. Isabella Della-Porta makes a believable activist, you admire her convictions, while George Fletcher’s marketing man Mark is suitably revolting! The satire is almost genial, a kind of comedy of matters, with points about modern life to debate during after-show drinks. Given the seriousness of some topics, it’s more fun than it should be.

As the play’s title, which refers to the colours seen when the eyes are closed, indicates, there’s darkness, too. It comes from the unexpected source of hippyish Rose, superbly performed by Katie Buchholz, who has even painted her toe nails in character. At first, Rose is enormous fun, Skinner makes you laugh at her even if it is cruel. But Cassie’s observation that Rose “scares me” brings forward the text’s mental health issues. Romantic obsession is only part of Rose’s fantasy life; her lack of vision, endearing at times, becomes dangerous. By the end of the play, it’s an open question as to how much the seemingly sweet Tim – with a professional debut in the role that Callum Sharp should be proud of – succumbs to Rose’s flights of fancy.

Eigengrau gets bleak quickly in the second act. There are loose threads: Skinner is heavy handed at times, the “happy ending” too double-edged. Above all, the sexual submission from both female characters is not for the faint-hearted. Be warned. Without spoilers, Cassie’s disappointments in life are painful (and well delivered by Della-Porta). As for Rose, who becomes a twisted Cinderella stand-in for her own fairy tale; never mind the shoe she loses, what she does with the one left is awful. Intrigued? I hope so – this is a play and production that should be seen by many.