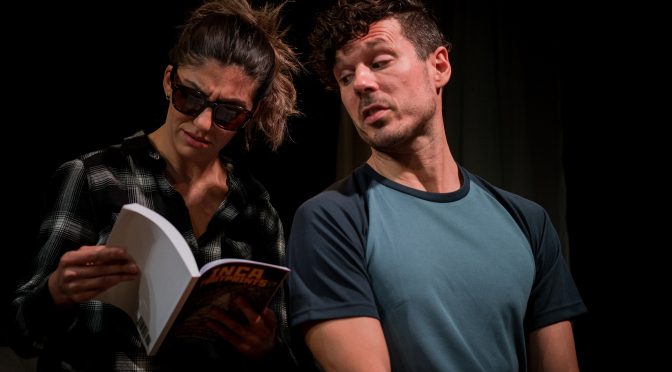 Even in a city as cosmopolitan as London, the chance to see contemporary European plays doesn’t come along often enough. This work, from Víctor Sánchez Rodríguez, went down well in Spain. Although it is a hard play to warm to, it is intriguing, has a distinctive voice and the production is first class.

The scenario – a couple taking a trip to Peru to save their relationship – is discordantly low stakes, given how much mileage Rodríguez hopes to get out of it. As both the characters become increasingly odd, observations on how “tourism perverts everything”, plenty of colonial guilt and a dash of both Marx and mythology become far-fetched and forced… yet, always interesting.

As for the couple, who (as usual for plays nowadays) are unnamed, they seem mismatched from the start. While the woman hates travel, the holiday changes her the most. She is smart and interesting and Dilek Rose gives a strong performance in the part; although how funny the play should be seems to be an unresolved issue. Her boyfriend is all passive aggression and place names. While Gareth Kieran Jones does well when emotion is called for, and saves a final uncharacteristic tirade that comes too close to ridiculous, his character is far too dull for her.

Criticism of William Gregory’s translation is difficult without a knowledge of the source, but it’s clear Rodríguez writing is heavy handed. A good deal of speech is bizarrely grandiose. And a lot of clichés slip in towards the end that make for uncomfortable listening. Further credit to the performers for making some deadened lines really live. After all, worrying about the “bourgeoisie self-contemplation of our drama” doesn’t really trip off the tongue.

Despite reservations, Cuzco is a trip worth taking. It’s a different view on plenty of issues that preoccupy British playwrights; there’s a good take on privilege for a start. And superb work from director Kate O’Connor, injecting a carefully controlled momentum, makes the play convincing throughout. Best of all is the sound design from Max Pappenheim, which supports the play brilliantly, providing an hallucinatory tone that fits the mention of a “suffocated howl” the characters experience to perfection.