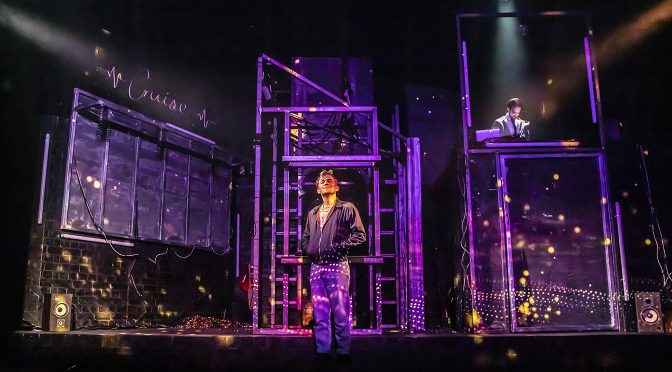 Previously available on stream.theatre, I was convinced that Jack Holden’s AIDS history play would be better live. And it is. But the surprise is how much superior – a solid script becomes something special through a spectacular performance.

Of course, there’s the thrill of seeing a piece set in 1980s Soho so close to the location itself. It feels great to be back in the West End! Thoroughly researched and poetically written, the script has an extra charge on stage.

Bronagh Lagan’s direction makes the action taut – there is considerable tension as we hear the character of Michael recount what he thinks will be his last night on earth. And the play packs a punch emotionally: the scene where Michael’s partner dies is a dramatic highlight.

Best of all, the show’s music is incorporated superbly with composer John Elliott performing from the start. The live soundtrack becomes almost a character in the action and structures the show admirably.

While the previous filming was accomplished, far more is achieved with the simple scaffolded set from Nick Corrall and Stufish Entertainment Architects. The industrial feel is appropriate for the show’s club scenes while also suggesting London’s constant building work. A small revolve and judicious video projections accompany a tour of Old Compton Street and provide a stage for the great set of characters we meet.

It is Holden’s performance that ensures success. Taking on a variety of roles is sure to impress on stage or screen, but seeing this done in the flesh is what theatre does best. There is a physicality to the show’s marvellous sections about Michael’s career in the music business – also aided by Jai Morjaria’s lighting design – that is inspired. A standing ovation made the socially distanced theatre feel full – something that Holden and his play deserve.