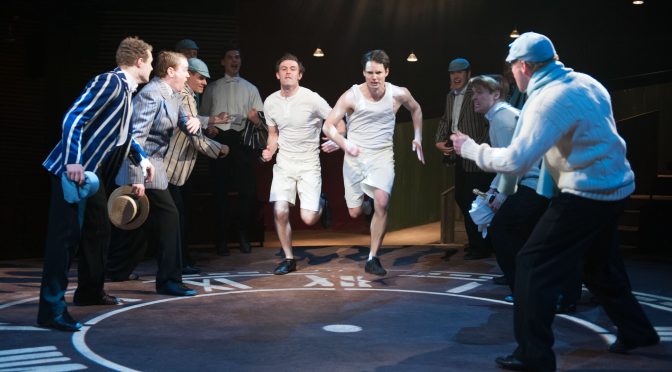 The Hampstead Theatre’s production of Chariots of Fire couldn’t be more timely. As Olympic fever approaches London, this crowd-pleasing show capitalises on the long treasured memory of the film and the Vangelis soundtrack, highlighting those abstract ideals sport inspires. More remarkably, even if you don’t like sport, and concur with one character that “running is for hamsters and children”, the play is broad enough to win you over as well.

Mike Bartlett’s respectful adaptation makes the translation from film to stage a comfortable one and faultlessly attends to the personal drama of the two main characters, Olympic runners and rivals Harold Abrahams and Eric Liddell. And Bartlett is also good on the bigger themes: the religious beliefs of Liddell, who famously refused to run on the Sabbath, and the anti-Semitism experienced by Abrahams. But when it comes to examining nationhood and what it means for these men to represent their country, the play becomes a little trapped in its period: it’s all too jolly, and Abrahams’ drive to be a new kind of professional athlete leaves less of an impression than the smoking amateurs that provide the laughs – the use of Gilbert and Sullivan is inspired, but singing Jerusalem goes a bit too far.

Sport and drama mix well. The sheer Olympian effort of the cast, who seem to run a marathon during the show, is awe-inspiring. The performances from the leads, Jack Lowden and James McArdle, are meticulous. Their teammate Tam Williams, who plays the swaggering Lord Lindsey, almost manages to steal the show by getting some hurdling in. Hampstead is an intimate venue that makes designer Miriam Buether’s set all the more spectacular – transforming the whole theatre into a stadium in convincing, rousing fashion – she clearly deserves a medal.

But it is director Edward Hall who gets the gold. You might think you can only run around a theatre so many times – but Hall’s theatrical invention makes each occasion interesting and he maximises the drama of every race. It’s his skill that makes Chariots of Fire run so well. Regardless of the performance of British athletes at the upcoming games, in 2012 British theatre certainly leads the field.