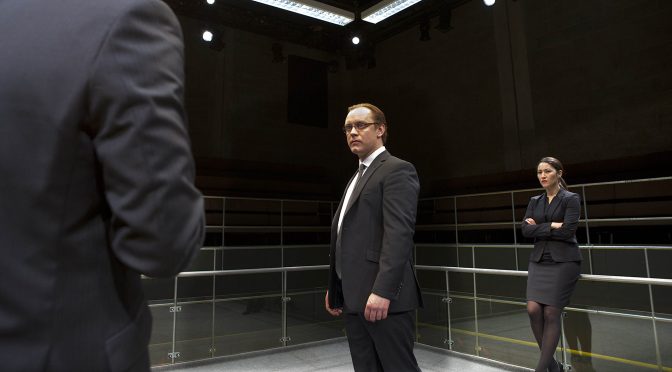 Mike Bartlett’s play Bull is a scorching consideration of corporate culture and bullying at work. Under an hour long, it’s remarkably powerful, as three colleagues do battle for two jobs. It’s an unfair contest, with Tony and Isobel ganging up on the “drip drip” Thomas, using underhand tricks and downright menaces to torment their co-worker into becoming the eponymous beast – and we all know what happens to bulls in the ring.

This fight is gruesome. Though darkly funny, the play is the stuff of nightmares for office workers. You really do want to hit Adam James, his performance as team-leading Tony is so good, while Eleanor Matsuura, as Isobel, gets better each moment of the show. Sam Troughton takes the part of Thomas, careful not to make him too sympathetic a character, his violent breakdown at the play’s finale superb.

Clare Lizzimore’s direction is spot on, but the show is all about Bartlett’s skillful script. Starting out the wrong side of exaggerated, with witty barbs you can just about imagine and Neil Stuke’s excellent appearance as the ruthless boss, more convincing that Alan Sugar (in real life), Bartlett becomes increasingly daring. Thomas loses the job but his humiliation isn’t complete. Even though the competition is over Isobel circles her prey with an offensive rationale that makes a chilling conclusion.