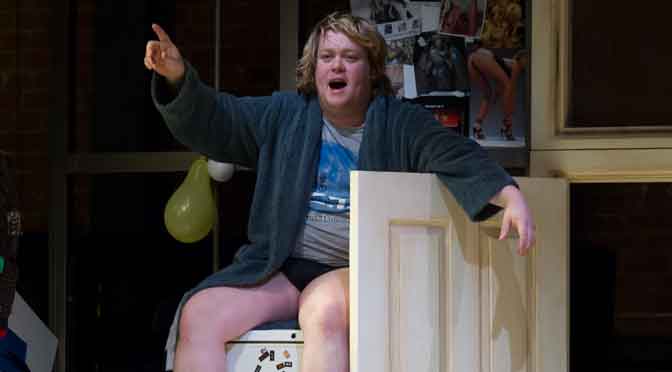 The young men in Ella Hickson’s play, presumably entitled Boys because of their behaviour, are just what you might expect: crude, boorish and pretentious, with the obligatory stolen road sign and traffic cone in their squalid flat. But Hickson’s writing goes beyond stereotypes. The jokes here are on the boys themselves and the humour serves to heighten Hickson’s impressively unerring sense of the dramatic.

The cast of Boys presents a convincing group of flatmates whose young lives are complicated by a tragic suicide. Danny Kirrane stands out as the “great protector”, raising philosophical questions, and becoming increasingly unstable under pressure. It’s a nice irony that the strongest performances come from the women in the piece: Alison O’Donnell is moving as a “motor mouth” girlfriend and Eve Ponsonby superbly cast as an intelligent graduate in the grips of a moral dilemma.

Despite popping pills and attempting to party themselves into oblivion, the boys fail to have much fun. And anyone older then them isn’t going to be cheered by the fact that all the characters see “the beginning of the end” in their graduation and the world of work. Boys is pretty bleak stuff.

As Hickson broadens her play to take on the topical, there are some heavy metaphors and a series of overlong goodbyes, not helped by some indulgent direction from Robert Icke, which diminishes the piece’s power and makes you wish these boys could grow up a little faster. But why would they want to? Hickson’s point is important – the filth the boys live in isn’t of their own making, the council is on strike and the city rioting. Are the boys simply sensitive souls lost in a generational mire? Possibly your age will determine how you answer that, but it’s a question worth raising and Hickson asks it well.