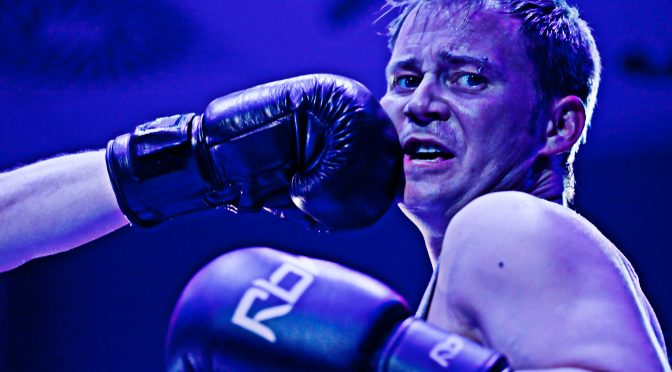 Beautiful Burnout was inspired by a brief trip to a boxing gym. Entranced by the experience, its co-directors, Scott Graham and Steven Hoggett, set about examining the pugilistic sport and have created an immersive and powerful theatrical experience.

Touring to the York Hall in Bethnal Green, they have found a great venue for their highly theatrical production, they are perfectly at home in this well known boxing venue.

The text, written by Bryony Lavery, is unfortunately thin. Interactions between the trainee boxers, and their formidable coach, are underexplored and the play ends at its most interesting point. Lavery struggles to convince regarding the world of “freely shared opinions and self-promotion” that she has researched. Only the older characters truly convince. Ewan Stewart plays the trainer with great presence and Lorraine M McIntosh almost steals the show as one of the boxers’ mothers.

But when the boxers actually train and fight, you really want to go the full 12 rounds with them. A period of extensive training as part of rehearsals has left the cast glowing as they perform Graham and Hoggett’s intense choreography.

Unlike often superfluous instances of technology in the theatre, Ian William Galloway’s video design adds greatly to the drama. The combination of film and movement is fascinating, supporting tension and emphasising a beauty that can be seen in the sport. While Beautiful Burnout doesn’t quite achieve the complexity it aspires to, it contains some knockout moments of theatricality.

Beautiful Burnout at York Hall is presented by Frantic Assembly and the National Theatre of Scotland in association with the Barbican
www.franticassembly.co.uk