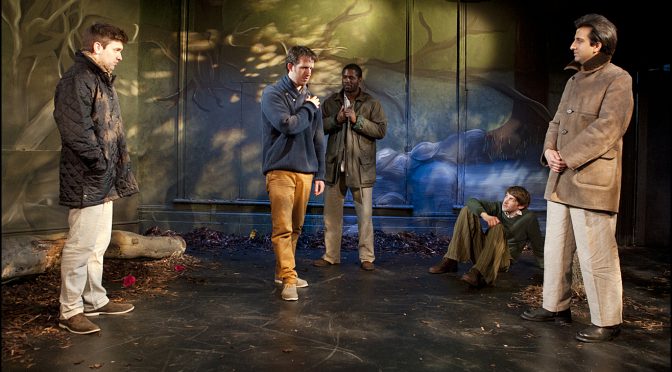 As You Like It isn’t an easy play for a small production to pull off – the cast is large and the settings of court and country promise a treat for a designer with a budget and space. That isn’t a possibility at the Lion and Unicorn Theatre but this excellent fringe production from the Custom/Practice Company actually benefits from the intimate scale. Director Rae McKen delivers a stripped-back show, appealing for its simple, no nonsense approach. With remarkably natural delivery her actors show such confidence that, like the action and thoughts they deliver, they seem “winged”.

Of course there’s that old fringe problem – the age of the cast. Maybe I am just getting old, as for me it’s the dukes and servants in Shakespeare rather than doctors and policemen who look too young. But I don’t want to be waspish. McKen has given her cast a great opportunity to display their talents and a number take on multiple roles with gusto. Kojo Kamara is especially notable as Charles in a fantastic wrestling scene.

The main players are outstanding. Fred Gray is admirably understated as the melancholic Jaques, giving an intelligent portrayal of a complex character. Oliver Mott is appealing as Orlando, and suitably heroic, but naturally As You Like It depends upon Rosalind. As Shakespeare’s finest heroine, she always outshines the frankly dreary character that captures her heart. In the role, Rebecca Loudon makes the unlikely coupling believable and is a delight from the moment she dons the guise of Ganymede. Loudon is surely a name to look out for in the future.

Written 4 May 2012 for The London Magazine