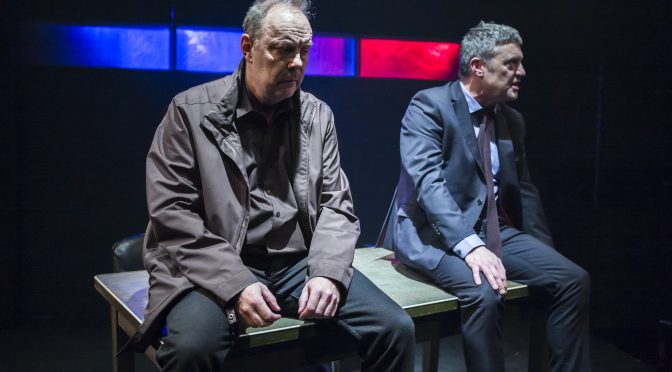 Known for his work on House of Cards and Mad Men, writer Keith Huff’s hit Broadway play receives its London premiere under the skilled direction of Andrew Pearson. “Oppressive and grey” in tone and subject matter, this is a grim police tale, superbly performed.

Never mind the rain, beat cops Danny and Joey tell the story of a bloody summer. Tragic events escalate (a little too torrentially) into an exciting crime story of crooked, out-of-control cops and marital breakdown.

Police procedures and political correctness add an authentic air, although a touch labored. More impressively, Huff evokes a love triangle with Danny’s wife. Despite the play being a two hander, the marriage and affair are palpably conveyed.

Danny is a “stand up guy”, his faults coming into explosive focus. Vincent Regan gives a performance that brims with violence – showing Danny’s loyalty to family jostling alongside illegal activities. Pal Joey is a “non starter”, a “mutt” even, as a recovering alcoholic out for the good life Danny has. David Schaal makes us root for this underdog while questioning how devoted he is to his bullying old friend.

The biggest achievement from both actors is in their teamwork, which convinces quickly and absolutely of their closeness. Their intimacy is the foundation for an examination of friendship against an increasingly breathless plot that’s so accomplished it becomes satisfyingly tricky to precisely locate blame and betrayal.