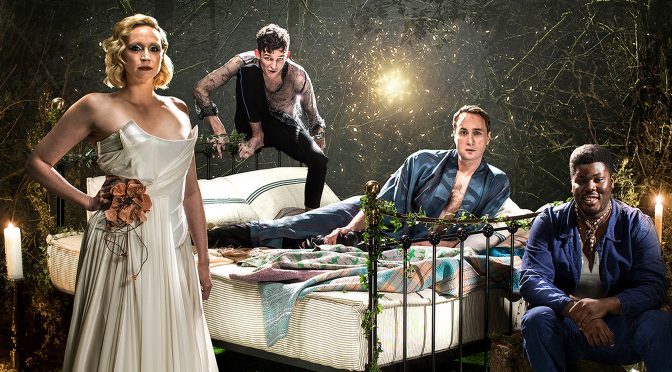 Filming theatre shows for broadcast in cinemas started during Nicholas Hytner’s time as artistic director at the National Theatre. So it’s appropriate that this resource, a defining feature of lockdown for theatregoers, visits and raises funds for Hytner’s new home, The Bridge Theatre.

As for the choice of show, this production of Shakespeare’s comedy, which won acclaim last summer, shows off Hytner’s directorial skills and his venue’s flexibility. It’s one of the best versions of A Midsummer Night’s Dream I’ve seen. And I even like the way its magnificent theatricality stubbornly refuses to be filmed.

Having small, movable stages and the audience standing in the stalls means the show is “immersive” – Hytner knows the term is a bit naff – with Bunny Christie’s brilliant design featuring beds that come up and down from the ceiling. And there are acrobats! David Moorst’s Puck is amazing to watch. Sometimes the film’s focus on performers’ faces is welcome, the crowd less distracting, and the joyousness Hytner instilled in the show is still present. But being in that crowd can’t be conveyed on a screen.

Fresh ideas and twists fill the play. There are small touches; a suggestion Hippolyta has a magical “power” over Hermia and making the ‘lion’ genuinely frightening (a great turn for Jamie-Rose Monk). Most noticeably is the change of gender over which fairy monarch is tricked – here Puck serves Titania (a wonderfully imperious Gwendoline Christie) to fool Oberon.

Oliver Chris’s Fairy King – who falls for the brilliantly funny Bottom of Hammed Animashaun – is magnificent. Their affair is sexy and funny and – evidence of how skilled both actors are – also moving. It leads to the best dad dancing I’ve seen and a promenade around the audience that is a real highlight. That Chris can get a laugh with the word ‘mulberries’ tells you all you need to know.

The joke at the heart of the play can go wrong. But Hytner targets a toxic masculinity it feels good to laugh at. Oberon and Theseus, who Chris also plays and doesn’t slack at, are poked fun of for their (fragile) sense of power. Likewise, the Athenian lovers Demetrius and Lysander are also a source of humour with their young machismo. Magically, it makes all these sometimes boorish men more appealing. Similarly, the “crew of patches” performers are a joke but in a gentle fashion. With a finale where Animashaun commands the stage, there’s just a glimmer that their show within a show is serious! The joke is that Bottom is trying – he even bears in mind that his performance is in the round. Bless. Yes, it makes it funnier that he’s so bad – such delusion could only come in dream. But it gives the production a charm and energy that, by the end, make it feel like a party.