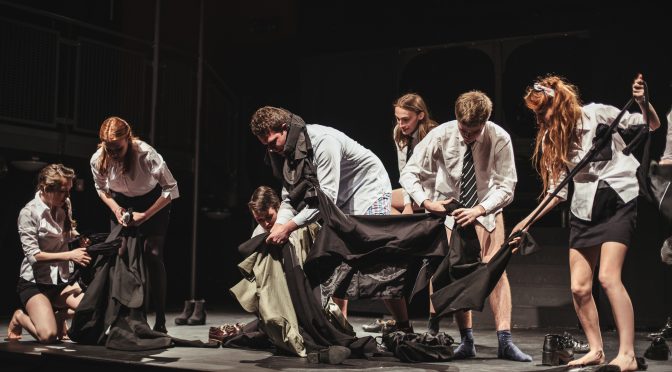 If school is a long time ago for you, it can be a challenge to enthuse about a play with kids taking exams. It’s an important topic, yes, but it takes strong writing to grab you. Happily, Jonathan Lewis’s A Level Playing Field holds its own alongside the impressive group of plays set in schools (and whoever included a copy of Julian Mitchell’s Another Country as a prop gets extra marks). Plenty of such plays have aims, but this one really convinces that the pressure youngsters are under nowadays, within a pernicious school system concerned only with grades, is a serious problem.

Any play about education will touch on broader themes, but Lewis’ focus is concentrated and controlled. It helps that his group of pupils, held in isolation between exams, are a fairly obnoxious private school bunch, who are at times difficult to warm to. The observations feel spot on, with intimate insight that avoids the mistake of making anyone too articulate (sorry, but The History Boys were just too clever by half).

The large cast are well differentiated, although I’d suggest three parts could be subsumed. Best of all is the strong ear for group dialogue that Lewis has a talent for (he wrote the hugely successful Our Boys). The students make a convincing group of peers and the dynamics between them is a neat study with plenty of laughs. As they slowly start to reveal their fears and aspirations, monologues that relate to their university applications form pithy vignettes.

When a teacher finally arrives – Joe Layton as the production’s only professional actor – it brings even more drama. As the play darkens, the humour develops and there are some touches of farce – a good idea that doesn’t quite succeed. But A Level Playing Field continues to serve as a terrific vehicle for its young cast of 18- and 19-year-olds. It’s against the spirit of the piece to grade anyone, but India Opzoomer and Elsa Perryman Owens both seem to inhabit their characters the most fully, while AJ Lewis takes the lead as Zachir with gusto. Both Jack Bass and Jojo Macari impress with their comic skills.

Indeed, the whole cast, for who this marks a first engagement, show more than just promise in a production that deserves much success. And the timing couldn’t be better. A Level Playing Field is surely essential viewing for anyone sharing space with a hormonally charged Sixth Former about to embark on their A level exams.