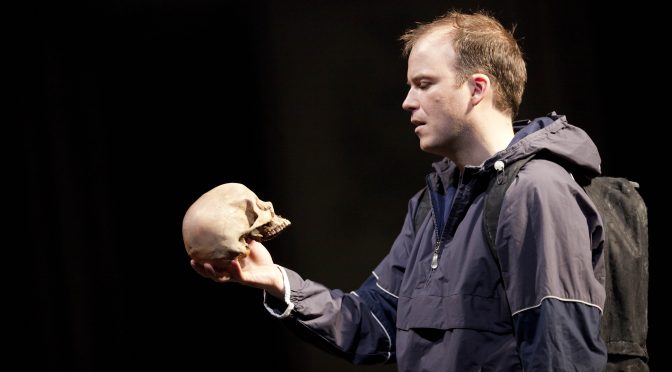 It’s not just theatre critics who have seen a lot of Hamlets – pretty much everyone has. So, as with all directors, and all Hamlets, Nicholas Hytner and Rory Kinnear face the challenge of pinning down the complex text and the temptation of adding a new twist. The National’s first Hamlet since 2000 sees them juggling these demands to produce an enthralling night out.

The production is clear, thoughtful and delivered with commitment. This Hamlet isn’t mad (so that’s one examination question sorted) and the decision to have him truly ‘put on’ his antic disposition turns the pretend insanity into a dramatic political act. This Denmark is a surveillance state with a secret service continually present. The heavies may be ineffective (think of the body count at the end) but they add tension, a topical twist and make Hamlet’s soliloquies all the more precious.

Overall, this is Hytner’s most disciplined direction for quite some time, and yet there are digressions that feel like desperate attempts to impress the teacher. Ruth Negga as Ophelia suffers most. Adding a feisty modern touch to this sensitive character is confusing and the implication that she is murdered is frankly silly. Costuming Kinnear in a tracksuit and adding rave music is distracting  – he is too old for it. And it is unecessary.

For this is a Hamlet with everything. Kinnear’s performance is remarkable and exciting. His Hamlet is the chameleon he proclaims himself as, with an over-arching concern for what this changeability might mean. Making full use of the character’s wry humour and intelligence, Kinnear’s grand delivery is perfect for the prince with a penchant for performance. At times he is quite literally in control of the spotlight and he always convincingly fills the stage.

As if Kinnear weren’t thrilling enough, this Hamlet boasts the finest Gertrude for many years. Clare Higgins gives a cracking performance with more than a touch of Joan Crawford (you can bet the bodyguards’ smart suits are hung on wooden hangers). This Mommie Dearest is formidable and believable – it is clear where a son’s complex comes from. A less confident director than Hytner might try to stem her scene stealing glances. But they add immeasurably, showing not only her ability but also Hytner’s confidence that his production explicates Hamlet in a riveting fashion.

Written 8 October 2010 for The London Magazine