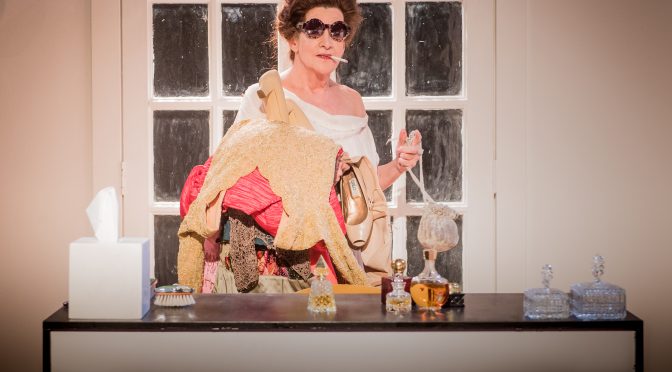 At the risk of damning with faint praise, Lanie Robertson’s play is more informative than it is profound. But art collector Peggy Guggenheim is a great subject to learn about. Following a story of modern art, alongside events in an extraordinary life, Robertson’s collation of anecdotes and vignettes is concise and entertaining.

Peggy was one of the ‘poor’ Guggenheims – her family were millionaires, not billionaires. With the realisation that it wasn’t healthy for artists to starve, her patronage, notably during World War II, built up a collection that spotted modern masters. Taking art seriously, while being flippant about sex, she slept with many of the artists along the way. Robertson sensitively balances the anti-Semitism of the age with dark moments in Guggenheim’s personal life, and, under the direction of Austin Pendleton, Judy Rosenblatt gives a convivial performance that shows Peggy as good company. The show is a 90-minute monologue – that’s a long time for one performer – but Rosenblatt makes it seem easy.

It’s a shame the opening conceit of the audience being guests at Peggy’s home isn’t retained; the “Mio palazzo, Sui palazzo” invitation is neat. Subsequent scenes talking to her daughter off stage, or conducting negotiations about her estate over the phone, seem clumsy in comparison. It’s with the more pedestrian moments that Rosenblatt carries the piece, juggling Peggy’s loneliness and uncompromising self-knowledge with a scandalous sense of humour and an attraction to men in “baggy trousers”. There are too few moments of reflection overall but a final pianissimo moment means we leave on a high, achieving insight into an exceptional woman.