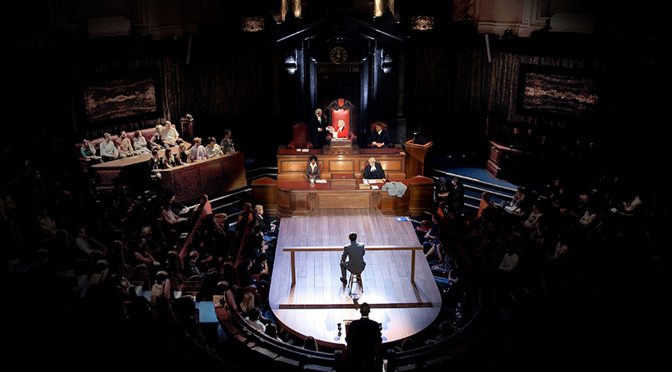 The selling point for Lucy Bailey’s production of this much-adapted Agatha Christie short story is its location. The former Greater London Council building is an art deco gem and its debating chamber, in which the audience take their seats, magnificent. Gaining access is well worth the effort. Seeing a show at the same time isn’t a bad idea.

Bailey uses the setting – which mostly serves as a courtroom – judiciously. With atmosphere aplenty, this is an exciting show. Excellent lighting design from Chris Davey has a big role to play. The show is hard work on the cast, in such a big space, there’s a lot of running around. But the location really is perfect. Oh, and it’s comfy too.

The Chamber is cavernous. But matching performances to its scale doesn’t make for great results. Emer McDaid’s Dietrich inspired villain, Romaine, is frankly hammy and Johnathan Firth’s defence barrister doesn’t come across as sharp enough. Thankfully, our hero, the accused Leonard Vole, played by Joe McNamara, is appealing. And proceedings are marshalled nicely by Martin Turner’s judge. The latter manages to inject a sense of drama that is generally lacking.

As mystery stories go, Witness for the Prosecution has a great twist; it’s entertaining, if not Christie’s best. But on stage the climax is clumsy. Bailey believes we cannot take Christie seriously. We all like to laugh at quaint period details, but there’s an excess of comedy here. Dealing with toffs and foreigners becomes just too jolly. And there’s too big a conflict with efforts to highlight that the death penalty is an option for judge and jury.

Where Bailey and her cast excel, is to make sure that the story and the action are clear. The diction is perfect, maybe with a clever eye on tourists who have English as a second language? In short, this is a safe show that nearly all will enjoy. With a good story and a great location, the final verdict must be positive. See it… but only if you’ve seen The Mousetrap first.