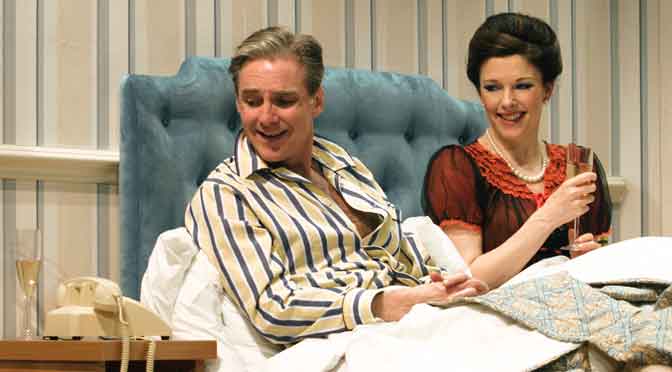 Ray Cooney’s 1984 farce Two Into One opened last night at the Menier Chocolate Factory, and it’s an exercise in experience and skill. Cooney directs and stars in his own work, a revival of one of his many successful plays, drawing intelligently on the long tradition of British bawdiness and playing with it to perfection.

Two afternoon affairs in a hotel are complicated since they occur in adjacent rooms. You can hear the doors slamming already can’t you? And they do so with satisfying thuds in Julie Godfrey’s set (I’ve lived in less sturdy flats). The lies surrounding the extra-marital mayhem spiral into the surreal, everyone takes their clothes off and nobody understands one another.

Setting the hotel next to Parliament, packed with politicians and civil servants to make fun of, adds to the laughs. Joking with sexuality as well as sex by introducing a misunderstanding about an affair with a tea boy from the Foreign Office, possibly made the work seem topical once. Now mention of “poofs” seems almost quaint. Unashamedly 1980s, there’s a nostalgic appeal that suits the humour.

In farce it’s the complications and extravagance rather than originality that make you laugh and there’s a comfy side to the genre that this show has in spades. Cooney knows what he’s doing – relax, enjoy yourself – and there’s a remarkable sense of confidence from this experienced cast. Michael Praed plays one of those slimy Tory MPs who characterised the 1980s, Nick Wilton is endearing as his bowler-hatted PPS and Jeffrey Holland plays the hotel manager marvellously. Best of all, the gorgeous Josefina Gabrielle, setting pulses racing in her ‘naughty nightie’, times not just every line, but every move, impeccably – the star of the night in a play full of stars.

Written 20 March 2014 for The London Magazine