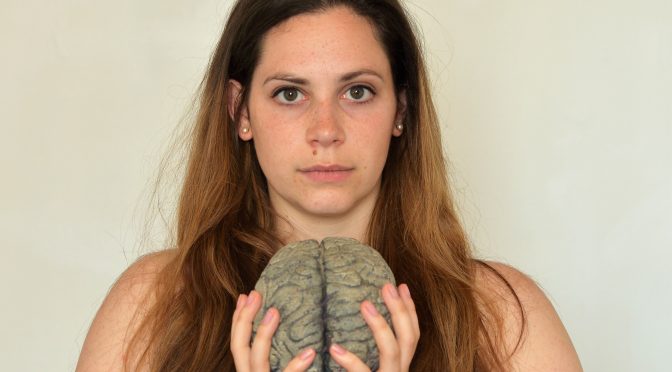 Here’s a SPOILER warning – but one that comes with little apology.
That sci-fi and philosophy class favourite – the brain transplant – is the subject matter for Ian Dixon Potter’s new play. Starting off vague, to create tension, makes for an unnecessarily tough beginning. Thankfully, the scenario is common enough to become clear quickly and when the experimental procedure is pinned down, its implications are set out with satisfying clarity.

Putting an old man’s brain into a pretty young girl’s body gives rise to questions of identity, sexual politics, and ethics. There’s a nod to evolution and even aesthetics – Tiresia is an artist. And there’s the fascinating idea that bodily chemistry means memory might exist not only in the mind – so that Tiresia is really a hybrid of two people.

That the exploration of these questions is uneven, given such complexity, is understandable. It is exciting to have so many debates raised. But it’s the philosophy that interests Dixon Potter more than the drama, and since he directs as well as writes there’s nothing to temper this or reign in the oddly dry dialogue.

In the title role, Natasha Killam does well to deliver lines that are burdened by learning. Especially when it comes representing her previous, older, incarnation her character is possessed by too many old-fashioned eccentricities to be credible. I know plenty of erudite older folk who are happy to discuss Schopenhauer, but they never use the expression, “Jack Robinson”. Too much of the dialogue feels like a collection of essay questions.

Any potential for comedy, such as Tiresia’s friend’s grand-daughter taking a fancy to her, gets the shortest shrift. It’s fair enough that the serious subject matter isn’t taken as an excuse for jokes, but seeing unrealised potential to lighten the play becomes frustrating. And pathos, in scenes with Tiresia’s former wife and the mother of girl whose body was donated, isn’t developed either – despite the efforts of Louise Morell who takes both roles.

With so little emotional material on offer we have only the ideas to entertain us. Sure to inspire conversation in the pub afterwards – but about the concepts, rather than play itself.