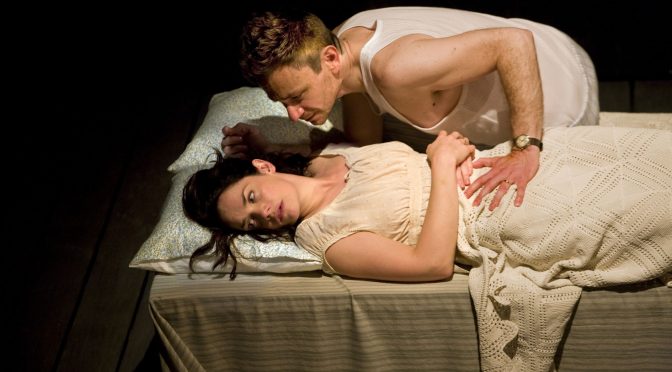 Michael Attenborough’s latest production at the Almedia is an adaptation of Ingmar Bergman’s classic film, Through a Glass Darkly. A family holiday, designed as recuperation for Karin after a mental breakdown, goes horribly wrong as the neuroses of the rest of the clan come to the fore and Karin herself has a dramatic relapse. If you like your drama dark and psychological, then this will not disappoint.

It is, indeed, grim stuff. The location is rendered in abstract muted greys by designer Tom Scutt, and is spot on as a backdrop for some brooding introspection, of which we get plenty. Cast members bare their souls with skill, and at the same time illustrate Bergman’s highly intellectual approach to his characters.

Ruth Wilson, playing Karin, deserves special note in her portrayal of both powerful delusions and moments of painful clarity. A key scene in which she hallucinates is fantastic theatre, aided marvellously with a score by Dan Jones. Dimitri Leonidas makes an impressive professional debut as her angst-ridden teenager brother Max. Karin’s father (Ian McElhinney) gets to show his creative Weltschmerz and her husband (Justin Salinger) worries about Karin’s health. Clearly there is no attempt on anyone’s part to avoid certain Nordic stereotypes.

The exploration of these relationships is cleverly done but somewhat dutifully reported. Bergman, like the character of Karin’s father, seems to have the rather morbid desire to examine mental illness for the sake of art. The production reports his investigations well and the acting is superb but it is all very cold. It is also very quick. In the end, Karin’s collapse is so rapid that her descent into madness is more of a plummet. Any attempt at resolution seems glib and, ultimately, unsatisfying.

Written 18 June 2010 for The London Magazine