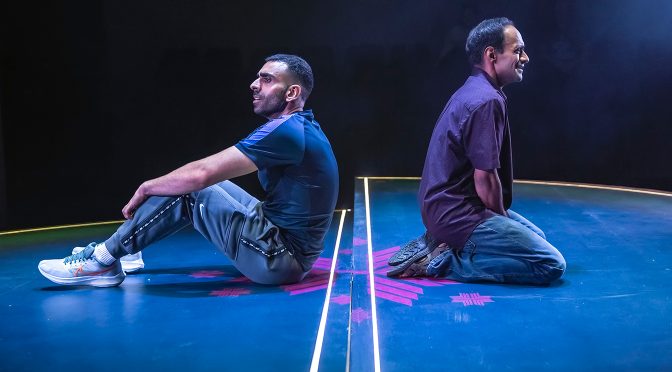 The letter in the title of Waleed Akhtar’s play covers two insults – slurs against people from Pakistan and homosexuals. The play makes important political points with clarity and skill. Still, the best moments come when the writer confounds expectations.

The P Word is a close examination of two very different men. Bilal (or Billy) is British and deliberately written as unlikeable. His life is work, the gym and Grindr. It’s a harsh view of gay culture, and any humour is bitter. It takes time to appreciate the problems the character faces, a journey the author Akhtar, who performs the role, tackles superbly.

Audience sympathy is channelled towards Zafar, who is seeking asylum having fled Pakistan when his homosexuality was discovered. Esh Alladi brings an intense energy to the role, which is agitating to watch. Anxiety surrounding the future and the trauma Zafar is running from are depicted with sensitivity. But it’s moments of joy, despite everything, that add originality and appeal most. What Zafar goes through is a wakeup call, delivered with conviction, that many need to hear – and the theatre has worked with the charity Micro Rainbow during production.

The two stories are told in tandem, woven together in the skilled script and by Anthony Simpson-Pike’s strong direction. Presenting the men in such detail – so they aren’t just cases or examples – leads to examining prejudices and provides insight especially into the characters’ sad self-hatred and questionable behaviour.

The P Word gets even better when the men meet. A friendship that develops with fits and starts acknowledges how complex their lives are. The performances blossom, but will romance?

There’s tension around this love affair, some coming from the fact that the characters see themselves as an unlikely couple. And, of course, there’s Zafar’s potential deportation. To avoid plot spoilers, let’s just say the play becomes both exciting and rousing. What impresses most is Akhtar’s clever handling of the sentimental, which leads to a superb finale.