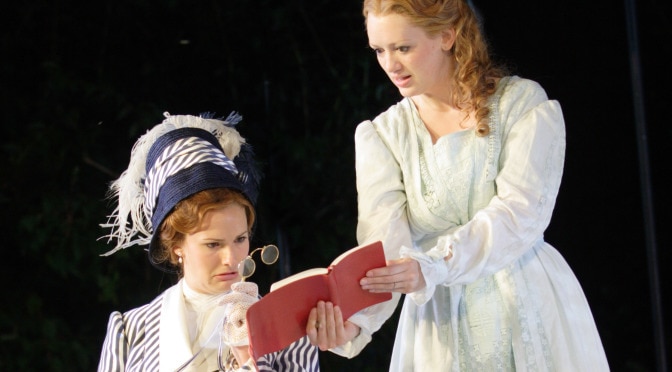 Director Irina Brown has said that she hopes her production of The Importance of being Earnest at Regent’s Park takes a fresh look at Wilde’s masterpiece.

Considering how well loved the work is, she may be in danger of offending but this risk is necessary.  When almost every epigram in the play seems to have been quoted on gift cards and the whole audience sits mouthing lines and nudging one another at what they recognise, something needs to be done.

Brown’s most notable effort is to make the play more physical.  With language as wonderful as Wilde’s it is all too easy to make his play static.  Instead, we have a slapstick fight between Dominic Tighe’s Algernon and Ryan Kiggell’s Jack over a cigarette case, their verbal jousting is matched a great physicality as they chase each other around.

Jo Herbert’s Gwendolen seems metallic in a wonderful costume that looks deliberately difficult to move in. Lucy Briggs Owen conveys a naïve sexuality in Cecily and is happy to flounce down on the ground when commanded to sit or whenever it suits her.

Movement also comes from the servants in the piece. Not only do we have both a memorable Lane and Merriman but also a cast of silent servants.  Like the audience, they watch and listen and in doing so bring us closer to the action, eavesdropping and acting out their own dramas as they respond to events or during an artful scene change.

In Brown’s efforts to make the play entertaining to the eye as well as the ear, she is aided by wonderful design from Kevin Knight. The actors have a great space to (quite literally) play in.  They have pretend flowers to pick, a miniature bridge to run up and down and even a dolls’ house to hide in.  A magnificent ramp might be treacherous in bad weather but, reminiscent of the old penguin house at London Zoo, it is a great comic touch.

Yet this is not just a question of our viewing the cast as if they were animals in a zoo.  As the production opens, a huge mirrored surface reflects the audience also.  The ensemble’s first action is to view the crowd.  Using glasses, binoculars and telescopes for a brief moment and taking advantage of the light conditions in an open-air theatre – we are on display.

Throughout the first act pretty much everyone checks themselves in this mirror, even if only to confirm their superiority – that everything is as it should be – of course, we cannot be sure that they also aren’t looking at us as well. Brown opens up this possibility along with many others.  This production makes us think about the class system at work within the play raises those eternal issues between the sexes.

It is surely telling that Cecily hides in her dolls’ house when her future is being discussed.  Most importantly, in emphasising Wilde’s observation of society and human nature, the source of his comedy is retained and enhanced. All the laughs are still there, we just get to hear the jokes afresh.

Written 10 July 2009 for The London Magazine