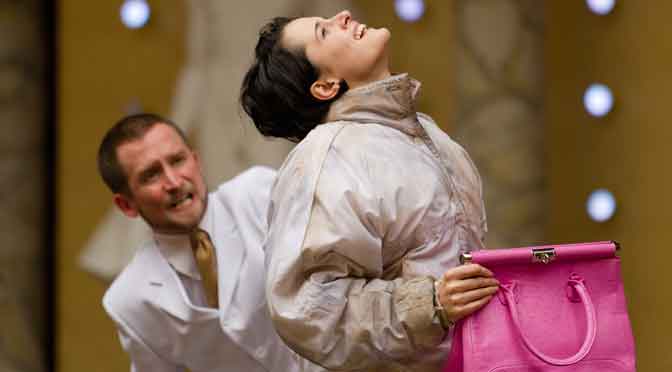 The 18th century philosopher, Bishop Berkeley, posited that the world only exists in the mind of God. So if something goes wrong with the celestial cerebellum you’re in trouble – which is what happens in Chris Hannan’s new play The God of Soho, resulting in a mind-boggling – and ambitious – new drama.

Big God (the inimitable Phil Daniels) resides in a heaven in disarray. His daughter, the Goddess of Love, the excellent Iris Roberts, has an unrequited love for New God (a brave performance by William Mannering). The couple descend to earth where they mingle with Essex celebrities such as Natty, a commendable Emma Pierson, and the unhinged homeless on the streets of Soho. All of Hannan’s self-absorbed characters are searching for something real. However, this is far more interesting than merely an exploration of celebrity culture – these are people searching for a “raw skinned, butcher naked” reality.

Hannan appears to have none of the self-doubt that affects his characters. It is difficult to be bawdier the Elizabethans (this is the Globe, after all) but The God of Soho manages just that. It is positively filthy in every way: verbally and visually, with the laughs relying on obscenity. Nor does Hannan shy away from big themes. He juggles plenty of abstract concepts with a surfeit of allusions and enough topicality to make your head spin. The really impressive trick is the way in which he deals with so many ideas while creating characters real enough to care about.

Director Raz Shaw does a great job of marshalling Hannan’s text and injecting plenty of debauchery. Both writer and director have an eye for involving the crowd, essential at The Globe. With appropriately eclectic music provided by King Porter Stomp, The God of Soho is often a riotous affair. The production has a distinctive vision that is also disconcerting. Certainly, the world inside Hannan’s mind is a weird and wonderful place.

Written 2 September 2011 for The London Magazine