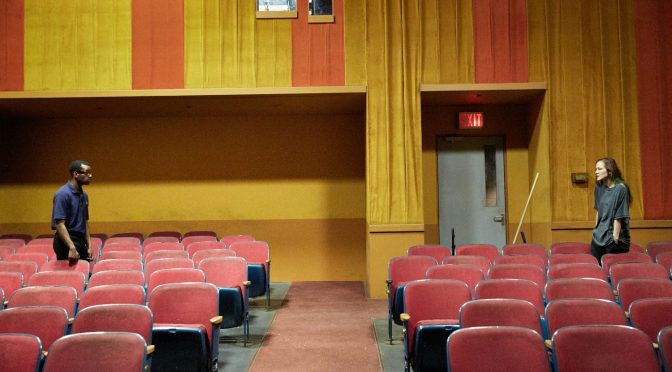 Annie Baker’s novel Pulitzer Prize-winning play is packed with offbeat humour. It’s a revelation that three cinema employees, sweeping up popcorn and just chatting, can be so engaging. The pace is slow, bravely so, yet this is one of the quickest three hours you could spend in a theatre.

The eponymous movie house is under threat – about to be converted from 35mm to digital projection. The new technology distresses cineaste cleaner Avery, on a break from his college film course, and puts the jobs of his colleagues at risk.

How films might influence self-presentation and how the characters, well, project themselves to one another is combined by subtly playing with the theme of performance. Time is taken to get to know these three and the result is curiously intimate, sincere and innocent: the trio become our friends.

Travelling with the production from America, Matthew Maher and Louisa Krause play the longer-term employees, so fully embodying their tragicomic roles that they are a privilege to watch. Theirs are moving and realistic stories of unrequited love against a backdrop of aimless existence that’s recognisable, believable and seldom staged.

Fitting in perfectly with the show is Jaygann Ayeh as troubled college boy Avery. His coming-of-age story is the backbone of the piece, while carefully distanced from any film fodder. Again, it is the understatement that impresses – his toe-curling sexual encounter with Rose and budding yet doomed friendship with Sam all performed with a studied awkwardness that makes the character endearing.

Under the direction of Sam Gold, also with the show since its beginning, a fitting confidence marks the methodical pacing – think art house not Hollywood. It’s a refreshing change to see something so gentle, so quiet. And the speed serves to immerse you in the detail of these lives in a precise and controlled manner.

Baker’s ear for dialogue is superb. It might seem easy to put ‘like’ into every sentence but in this script the technique is credible and the low-key jokes are treasures. Despite the play’s length, it’s economy that’s the key. Sam’s question, asking if a new team member is “familiar with the oversize polo shirt” – that ubiquitous uniform for the underpaid – is something that will stay with anyone whose has ever had a ‘bad’ job.

A final point in favour of The Flick: workers in low-paid jobs with few aspirations are seldom the subjects of drama. Better still, with her unpatronising and realistic treatment of these frequently boring, frustrated lives, Baker goes behind the scenes to provide a drama about a new kind of working class that makes her play one of the most original around.