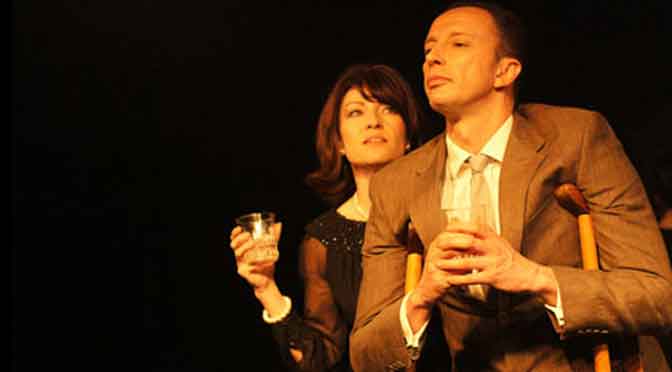 Those who love musicals know that the art form can tackle pretty much any subject matter. But some might raise eyebrows at show tunes about an American presidential campaign. John Dempsey and Dana P. Rowe’s musical The Fix shows there’s a good fit between the two since the theatricality and artificiality of politics is highlighted by the genre.

This is the story of Cal – a young man from a dynasty that sees politics as a game – and his journey to power, from a stint in the military to a marriage of convenience, and the ensuing sleaze, affairs and mafia connections. Director Michael Strassen does a superb job with this fast-paced, exciting story, injecting it with humour and passion. A 60s setting allows Rowe to show off a panoply of musical styles that can’t fail to impress and Dempsey’s smart lyrics are full of satire.

If The Fix has a failing it serves to prove a point. Cal is blank slate for others to manipulate. The suggestion is that’s what it takes to get ahead in politics, and his character is somewhat flat – though this certainly isn’t the case with Louis Maskell’s singing, which resonates beautifully. Maskell also displays considerable acting skills and manages to put some flesh on his character in scenes with his mistress Tina, played by Daisy Tonge, whose strong voice makes this young actress one to watch.

As the plot thickens to include Cal’s desperation for a fix because of his drug addiction, the real focus becomes not the heir in waiting to the presidential throne, but his mentor and his mother. As the former, Miles Western gives a tremendous performance as a Machiavellian mastermind of spin with plenty of motivation – his continual questioning of the very sanity of his plan gives The Fix its edge. Yet the star of the show is Liz May Brice as Cal’s mother. In superb voice with the highest calibre of acting, this mad mixture of Lady Macbeth and Mama Rose is truly captivating.

Written 28 June 2012 for The London Magazine