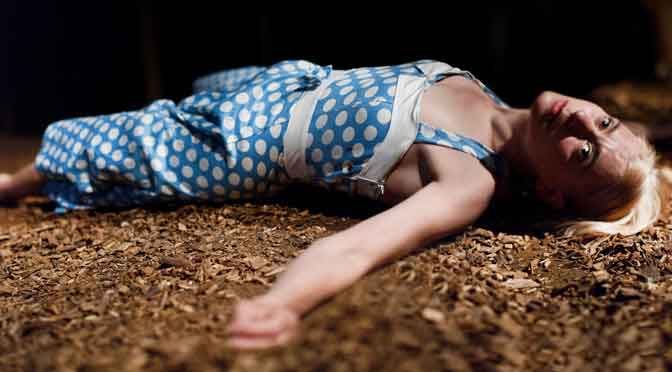 When it comes to ‘immersive’ theatre, Punchdrunk are at the top of the list and their return to London with The Drowned Man: A Hollywood Fable is a hot contender for theatrical event of the year. Amazingly there are still some tickets left for August, so stop reading this, now, and book them.

Creating ‘The Temple Film Studios’, the production is unprecedented in its size. The scale, breathtakingly ambitious, is part of the point. As you venture around unaccompanied, ostensibly a guest at a wrap party waiting for filming to finish, you see behind the scenes and inside the minds of its inhabitants. There are spooky rooms of special effects and shrines to movie stardom, film sets and multiple characters you can choose to follow or ignore. You’re given a clue that the overriding story line follows two lovers, with infidelity driving one of them insane. You might see William killing Mary. Or vice versa. But there’s more going on here – an exploration of fantasies and fears dripping with a drug-induced hedonism. Mind-blowing stuff.

A whole movie-set town is recreated, along with a saloon bar and a cabaret room, a Twin Peaks style ball room and offices, oh, and a forest. Dancing on top of caravans? No problem. Or you might be drawn into a dressing room to watch one of the numerous cast prepare or perform some opaque ritual. But listing the sights seems to miss the point – the project is so mammoth selectivity is forced upon you and you come to live in this world rather than watch it. That each visitors experience will be unique is what makes it so especially theatrical.

Back to size again. It’s all a little overwhelming and the danger the whole thing will implode in on itself is clear. It’s no small achievement that the choreography, from Maxine Doyle, who also directed the show along with Felix Barrett, manages to makes a stand. There are times, in the dark, with the music very loud, you wonder where the action is and the sets, with Barrett working alongside Livi Vaughan and Beatrice Minns, are so crammed with detail you approach sensory overload – they even smell fantastic.

The masks the audience wear don’t make it comfortable (this seems a game for a young crowd all around) but they manage to claim back a strange intimacy for the show. They might also enable its sexiness; the plays on voyeurism are skilful and the casts’ interactions with the crowd bold. It’s a mixture of eroticism and death with a meta-text concerning the creation of our deep and dark desires that is potent. For atmosphere The Drowned Man surely can’t be beaten. It’s tempting to suggest it marks an apogee for this form of theatre that must not be missed.

Written 8 July 2013 for The London Magazine