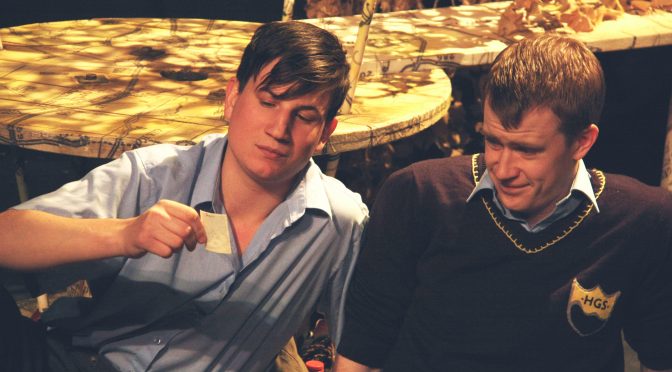 As a housemaster at Harrow, John Rae knew plenty about boys: how vicious they could be and how silly. His 1961 novel, The Custard Boys, looks at a group of evacuees from the Blitz as they grow up in Norfolk. This is a coming-of-age story with depth, a touch of William Golding, and a homosexual sub-plot that must have been shocking at the time.

Rae’s novel is now out of print, which is a shame since director Glenn Chandler’s adaptation really makes you want to read it. Chandler seems to have taken a great deal from a rich source to produce an ambitious play. The cast scampers around Cecilia Carey’s boys-own adventure set with terrific invention.

The talented young ensemble excels with humour about stiff upper lips, playing schoolchildren superbly and managing only slightly less well when it comes to being their parents or schoolmasters.
Josh Hall is especially funny as the earnest Felix, while Jack Elliot Thomson gives an enthusiastic performance as the ‘new bug’ Peter, whose place as newest recruit to the gang is supplanted by Mark Stein. Stein, played sensitively by Andrew St Pierre, is a wildly sophisticated Viennese Jew. Having to eat spam sandwiches is the least of his problems as he becomes a target for bullying. Curley is given the task of befriending him and they fall in love.

The relationship is fascinating and empowering, and Curley is performed wonderfully by Charlie Cussons. As paranoid as any of the boys about being regarded as a cowardy custard, and conservative in the way children often are, Curley’s sense of British Bulldog justice gives him the confidence to rebel.

The subplot highlights only one of the themes within The Custard Boys. With the strange logic children sometimes display, the romance becomes less important than the boys’ ability to fight. In a jingoistic atmosphere, encouraged to “play games and pretend” war, the children become perverted by patriotism, leading to a tragic and moving conclusion.

Written 16 April 2012 for The London Magazine