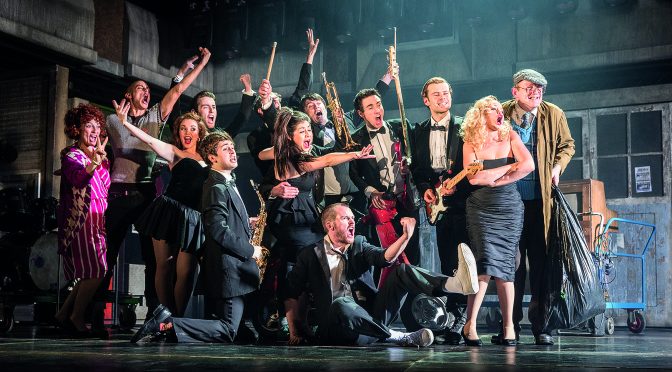 The Commitments isn’t the kind of show that recommends itself to reviewers – I can’t think of a more lamentable coupling than a jukebox musical riding on the tails on a popular film. But the critics have been kind. And the public has already voted with its feet. The Commitments is now booking until September this year.

Roddy Doyle’s book (the film came in 1991) is set on a council estate in Dublin well before any talk of Celtic Tigers. A group of locals form a band and, well, that’s it, really. There’s plenty of class-consciousness and the generally inspiring idea is that music changes lives, but very little else.

It’s no small achievement that director Jamie Lloyd manages to mask how thin the whole thing is and make it entertaining. Working at a terrific pace, he brings out plenty of humour and utilises Soutra Gilmour’s stunning set so that the whole thing has a slick West End feel.

And the performances will win you over. Denis Grindel has great stage presence as the band’s instigator and manager – you really believe he could get this thing going. Killian Donnelly gives a tremendous performance as Deco, the most naturally accomplished performer, with the arrogance to match. Joined by a host of talented others, including Sarah O’Connor, Stephanie McKeon and Jessica Cervi, who all sound great, and the band’s skinhead bouncer (Joe Woolmer), who gets the biggest laughs. It’s an achievement for such a large cast to individuate themselves.

As billed, The Commitments is hard working and there’s plenty of noise and action, with lots of crude gags that are more hit than miss, even if the ratio is a close call. Quickly into the second half any idea of a story is abandoned in favour of a concert. It seems an honest move that could have saved everyone a lot of trouble if adopted from the start. From hereon in, if soul music is your thing, you are bound to join in the fun.

Written 23 February 2014 for The London Magazine