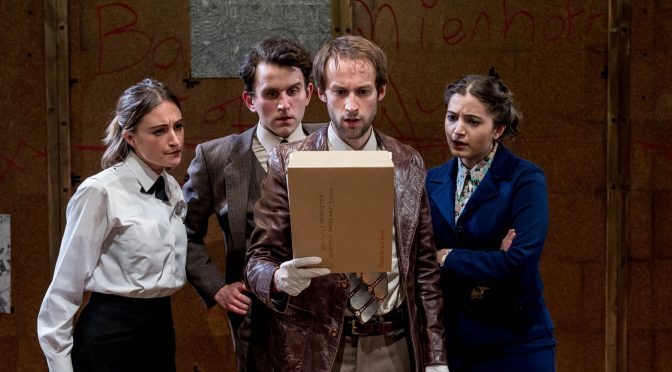 Playwright James Graham continues his hugely successful engagement with politics by looking at the history of 1970s anarchist bombers, The Angry Brigade. The first act opens on a grim basement room in which four young coppers are secretly tasked with investigating the new phenomenon of homegrown terrorism. Parallels with current concerns aren’t forced, and the authorities’ efforts are often comic, as the police loosen their ties and discover pot in an attempt to understand this new breed of criminal. Harry Melling and Lizzy Watts excel with a variety of roles: police, victims and suspects. But the act belongs to Mark Arends as the impassioned young detective Smith, whose performance is perfectly attuned to the writing’s clever drollery.

After the humorous highs of the first act, the second act may slightly disappoint. Now with the Brigade, played by the same cast of four, the laughs are more guarded and there’s less period detail to poke fun at. Whatever you think of the politics, the ideas are presented (rather frighteningly) well. And the performances are full-bodied and intense, in particular those of Melling, again, and Pearl Chanda (as Anna Mendleson), whose fraught relationship provides a necessary emotional core to the section.

The temptation may be to see the play as split into two sides of the same story, both bravely sympathetic and boldly different. But The Angry Brigade is so meticulously written that parallels between the police and the protesters are developed with estimable precision. The crafted complexity of the script is highlighted by James Grieve’s direction and Lucy Osbornes’ design, which add a visceral, shock element to the dialogue – cast members slam filing cabinets to the ground to signify each bomb that goes off. No surprise, then, that this play feels like an explosive hit.