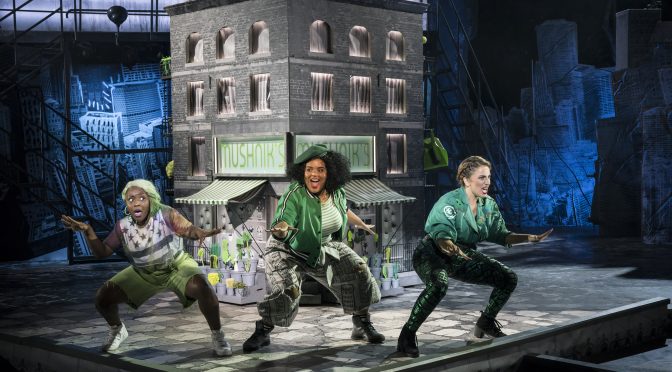 If this production is anything to go by, director Maria Aberg has green fingers – she nurtures this hit musical about a carnivorous plant from outer space marvellously.

Adapted from Roger Corman’s B-movie back in the early 1980s, Little Shop of Horrorsis a youthful work from the legendary Alan Menken, packed with musical ideas and barely a bum note. It includes the catchy-as-anything title tune, the brilliant romantic theme ‘Suddenly Seymour’ and the hilarious number ‘Be A Dentist’ – all of which you’ll be humming long after the show ends.

The book and onomatopoeic lyrics by Howard Ashman are great fun and there’s an underlying wit that continually impresses. The story of a freakish flower that changes the fortunes of its florist shop owners is told at a cracking pace, while the fact that growth comes at a price makes the piece a simple but effective morality tale. It’s quirky, dark, campy and cultish – all qualities appreciated by Aberg.

The mock low-budget design from Tom Scutt recalls the show’s Off-Broadway origins and original film source, full of anarchic energy and surprises – an achievement in such a polished production – and adds great charm. Scutt’s wonderfully detailed costume designs are fantastic, too, and his skyscrapers in shopping trolleys a nice nod to the skid-row setting.

Our hero Seymour isn’t really as sweet as he seems, or maybe he’s just dumb. Either way, Marc Antolin does a great job in the role, sounding great and with terrific stage presence. Jemima Rooper has a nice edge as his love interest and a trio of narrators (Renée Lamb, Christina Modestou and Seyi Omooba) are superb – each has real star quality. A couple of performances are too broad, mistaking the show’s fine edged comedy: Matt Willis’ dentist lacks thrills and Forbes Masson’s Mr Mushnik is reduced to a cheap gag.

It’s Seymour’s nemesis, the plotting plant he names Audrey II, that is the star. The clever move is to use not just puppetry here but to cast a drag queen in the role and Vicky Vox steals every scene – this Audrey II really reigns. You’re kept wanting more of Vox, leading to a truly spectacular encore number, including a new wardrobe for everyone, where the show’s crazy creativity is unleashed, making sure the audience leaves blooming.